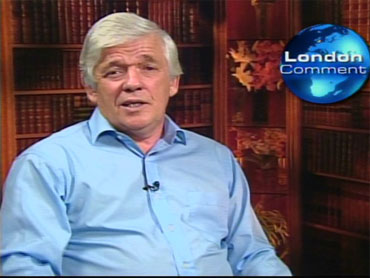 I have always believed in the free market -- in the capitalist system. I grew up watching the failure of monolithic state control behind the Iron Curtain. In the 1980s, I watched Mrs Thatcher's revolution which saw the destruction of state and trade union power in this country, to be replaced by the rights of the individual to make as much money as he or she could. And now I have watched as not just Russia but China and India have all signed up to the same principle. The argument was over, it seems -- the free market rules. But the banking collapse cast a dark cloud over capitalism. It illustrated that bankers without control would produce not prosperity but chaos. And the bankers are casting another shadow as well. Because rather than showing any guilt over their excesses which have caused the rest of us such damage, they are already dipping their sticky fingers into their customers' pockets again, and helping themselves to huge bonuses. The bosses of even middle sized British financial companies get average salaries of more than three million dollars a year, and their salaries are soaring even as the rest of the country groans under a regime of government cuts. Those CEOs earn perhaps a hundred times more than the average worker here. And in the US the situation is even more extreme. I read recently one statistic which I find difficult to believe, but here goes -- that America's richest 74 citizens get more money each year than the combined incomes of the bottom 19 million combined. Those in the middle -- the mass of people who hold jobs, pay their taxes and hope for better times -- hate both the excesses of the super rich and the demands of the very poor, since each could cost them money. So at present there is little talk of equality, of taking from the rich and giving to the poor. Indeed the emphasis is all on cutting the amount we spend on the poor, but if the economies of the West decline such demands will reappear. Our people might decide that they will not put up with such glaring inequalities in wealth. The pendulum which once swung from left to right could well swing back again. This is Peter Allen for CBS News in London.
Peter Allen