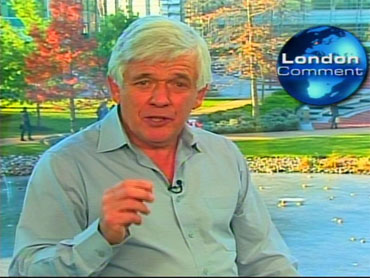 The creation of the Euro represented more than an economic dream. It was an attempt to create a European superpower which could equal and perhaps surpass the United States of America. We British, mainly because of our imperial history, could not bring ourselves to give up our sovereignty in that way, and so we were left on the sidelines as the rest of Western Europe powered on towards economic union. We hung onto our Pounds, and now the sidelines seem exactly the right place to be, as both the Euro and the wider European dream seem to be in meltdown. That matters to us, and it matters to you as well, because taken together the European Union is the world's largest economy, and if the Euro finally breaks under the strain of debt then the economic tsunami created will reach your shores as well as ours. Commentators here are pointing out out that the great depression began in America, but was made much worse by the banking crisis in Europe a couple of years later. So could the Euro simply disintegrate? Well, all those involved swear no, but the pressures seem to grow each week, and the bailouts do not appear to stop the contagion from spreading. First there was Greece, then Ireland, next in line seems to be Portugal ... and maybe even Spain. For the first two, the European authorities organised huge rescue packages. But to do so for a country the size of Spain would be more than even Germany could afford. And so the muttered talk is of breaking up the Euro -- and creating an inner circle with strong economies around Germany forming their own currency. And what next? Well no one knows. Suppose one country simply decided to stop propping up the banks, and let investors suffer the consequences rather than taxpayers? What would happen then? No idea, but I can confidently predict it would be chaos -- which is why governments will fight so fiercely to keep the Euro afloat. In the end, they might manage it -- there are, after all, many political reputations at stake here. But as the individual countries squabble while the ship starts to sink, the dream of a United States of Europe has never seemed further away. This is Peter Allen for CBS News in London.
Peter Allen