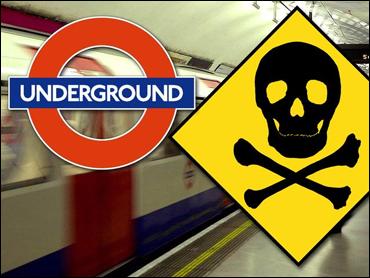 Lawyers for three terrorism suspects accused British newspapers on Monday of fabricating a scare about plans for a poison gas attack on the London subway, saying police had never even questioned their clients about such a plot.

"There's been a quite extraordinary tidal wave of completely contemptuous and prejudicial coverage of this case," said Gareth Peirce, attorney for Rabah Kadre, 35.

A judge ordered Monday that the three be held without bail for four weeks and said they should return to court Dec. 16.

The suspects — Kadre, Rabah Chehaj-Bias, 21, and Karim Kadouri, 33 — were arrested Nov. 9 and charged under Britain's Terrorism Act with possessing materials for the "preparation, instigation or commission" of terrorism.

According to CBS News Correspondent Tom Fenton, British newspapers say they were planning an attack in the London subway using poison gas -- one of the weapons of choice in the al Qaeda terrorist manuals. A video of a dog being killed by gas was found in a training camp in Afghanistan earlier this year.

It has been reported that the British intelligence services had been keeping these men under surveillance for over six months, hoping they would lead them to a major al Qaeda figure. Intelligence sources say that an al Qaeda operation of this kind would not have been planned without the knowledge of Khalid Shaikh Mohammed.

Mohammed is thought to be one of Osama bin Laden's chief lieutenants and the alleged mastermind behind 9/11. He is also believed to be the current head of the al Qaeda military committee.

But tracking him is difficult. Documents obtained by CBS News from a Southeast Asian intelligence organization show that Khalid Shaikh Mohammed has used at least 28 aliases.

The elusive Mohammed and other al Qaeda leaders are still at large.

British Intelligence may have lost a chance to find one of them by reeling in these smaller fish. Whatever prompted the British to arrest them, Fenton reports that it must have been seen as a clear and present danger.

Paul Farnhan, a lawyer for Kadouri, said police had never questioned the men about such a plot during six days of interrogation.

Peirce accused news outlets of "publishing completely manufactured information" and said she had written to the attorney general about the coverage.

Deputy Prime Minister John Prescott and the spokesman for Prime Minister Tony Blair denied the news reports of Tube attack plans on Sunday, saying there was no evidence the men had planned a gas or bomb attack.

Blair, in a taped interview broadcast Monday night, declined to comment specifically on the case but said he was wary of creating panic by publicizing too many terror alerts.

"If there is a specific threat against a specific target we, of course, will warn people," he told Independent Television. "But we have got to be very wary of acting on general information, of issuing warnings when they are not really justified according to the evidence."

Scott McClellan, a White House spokesman, was asked whether there could be a similar threat to transit systems in the United States.

"We take all types of threats seriously," McClellan said. "The report you refer to is another reminder that we are at war, it is a different kind of war where we are seeing unprecedented cooperation and sharing of information between countries.

In Slovakia, Interior Ministry spokesman Boris Azaltovic said Kadre had hidden in the Eastern European nation for a year with a false French passport. Azaltovic said Slovak police had monitored his stay and after he left found documents which they passed to British officials.

According to the daily newspaper Sme, Slovak police told their British counterparts when Kadre left Slovakia and tried to enter Britain on Nov. 7.