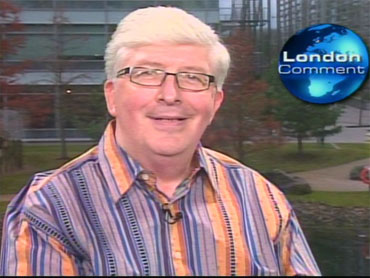 It's coming up on Christmas and we're gripped, not by the economy, the Royal Wedding, or even our cricket team thrashing the Australians on their home ground. No, here in Britain, the big topic of conversation is the real possibility that it might snow in London on Christmas Day. And before you say "you're kidding", the other proof that we may be losing our minds is the announcement that some of the stores have run out of mistletoe. But back to snow on Christmas Day. It doesn't happen often. Al Gore will explain why, but this year the odds are in favour of the millions who will gamble on a carpet of the white stuff descending across our capital. Of course, this national obsession has nothing at all to do with the recent heavy snowfall that we've been suffering. To us Brits, that's incovenient snow. That's different snow. When we get only a couple of inches of snow here, everything seems to stop, and chaos ensues. We grumble and groan with the best of them. But if it snows on Christmas Day and exactly the same thing happens, we embrace it. We rush out into it, chuck fistfuls of the stuff at each other and celebrate it. All this dates back to Dickens of course and old Scrooge himself. But more to that 1942 movie, "Holiday Inn" and Bing Crosby singing 'White Christmas'. Which is perennial at this time of the year, along with the Santa Clauses, the trees and the decorations and tempting storefront displays that have been lit up since October. But there is one place in the UK where the locals refuse to be a part of the pre Christmas rush. It's home for eighty three good people on the island of Bryher just a few miles off the English coast and they won't put up so much as a Christmas card until Christmas Eve. It's a tiny bit of rock in the Scilly Islands, with just thirty four houses, a section of coastline called Hell Bay -- and Fraggle Rock, the island pub, run by the way by a good old fashioned Landlord called Chris Hopkins. One of the fishermen there reckoned to me that the world had gone Christmas crackers but Bryher Island wouldn't be part of it. Besides, all the islanders attend the Christmas Celebrations and that solves the baby sitting problem. For the rest of us, it's probably going to be a white Christmas. Irving Berlin and Bing Crosby have a lot to answer for. This is Simon Bates for CBS News in London.
Simon Bates