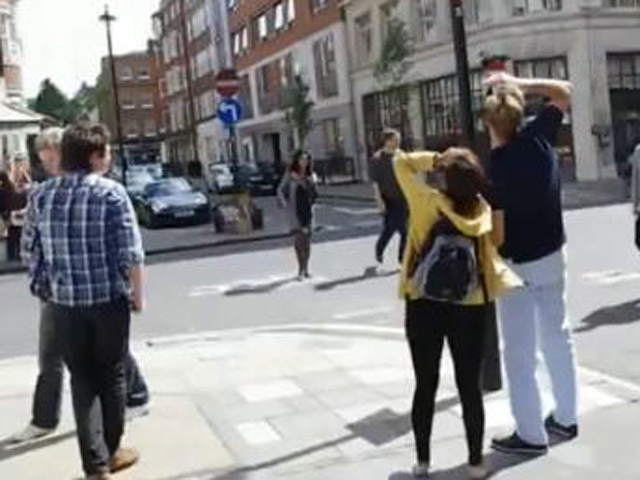 A new viral video making the rounds on the Internet purports to show what's been dubbed a "mothership" and at least three separate smaller alien spacecraft filmed in the skies over London.

The most famous video (which was taken anonymously and is one of two or three versions in circulation) shows a large glowing white oval moving in and out from behind clouds over the course of about 20 seconds, and then zooming off, with three white dots also making an appearance.

So what are they? The pattern of movement does not resemble any known aircraft, and some are already proclaiming the sighting as proof of aliens. While not exactly the same as landing on the proverbial White House lawn (or above 10 Downing Street), some say an appearance over London is a pretty high-profile statement that aliens are here.

Others aren't so sure. Some believe that the videos are merely a viral marketing tool to publicize the upcoming alien sci-fi film "Iron Sky." One argument against that explanation is that the film is not slated to be released until April 2012, though studios often begin early promotion, and these amateur UFO videos would take little time or effort for special effects professionals.

In fact, the crudeness of the London UFOs may be a sign of fakery. The spacecraft in the video resemble those in an alleged UFO video taken over Jerusalem earlier this year, and which many experts (including myself and those at MUFON, the largest pro-UFO organization in the world) concluded were faked.

The mothership and its UFO siblings videotaped over London are among the absolute easiest images to fake: glowing ovals and dots. There's no detail, no flying saucer windows or aliens waving hello from high above. Just white moving dots that anyone with some video-editing chops could create with little effort.

Another sign that this is a fake is the way the video begins. The cameraman is apparently randomly videotaping a mundane sidewalk, and then moves quickly to a street corner, where he takes careful note of the reactions from passerby before aiming the camera up into the sky to see what, exactly, it is that has so captivated their attention. He videotapes the skies for about a minute, then once again brings the camera down to show us a small crowd of people who are also staring into the sky and getting photos.

This is highly suspicious behavior for someone who truly believes that there are alien spacecraft in the skies above that could reappear at any moment. If you spotted what you believed to be a UFO that could zip away at any moment, wouldn't training your camera on the spaceship be the first thing you would do? Whoever created, edited, and posted the video clearly wanted to make sure that viewers knew that others had seen, and were reacting to, the lights.

Aliens may in fact be out there, but the evidence so far suggests that the London UFO video is another hoax.