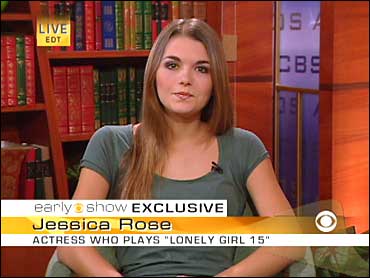 Two-and-a-half million people a day go online to watch "Lonelygirl15," who is a true Web superstar.

Her YouTube video series has become an obsession for all kinds of people, and it turns out the supposed 16-year-old home-schooler isn't a real person, but an actress.

Her true identity was revealed this week. Jessica Rose, 19, was born in the United States and raised in New Zealand.

"Lonelygirl15" was the brainstorm of two men who met at a cocktail party and decided to cast an actress to play Bree.

She told Smith she heard of the role through Craig's List, remarking, "Where else? Everything starts with the Internet!

"I came for my first audition and they had me read a little blog, and it was actually called 'Children of Anger' at the time because, I guess, they were kind of trying to keep the name (secret). So, I did the little blog into a webcam. I had never done an audition like that before. I was like, 'OK, this is a little weird!' And I had two more callbacks, and I got the job."

Rose says most of the videos are scripted, though they do give her some room for improvisation.

And she says the couple of days since her name was revealed have been nuts.

"It's been really, really crazy," Rose said. "I've never had so many phone calls in all my life, and messages. It's been very overwhelming. I mean, I love it. People have been great, but it's just been so overwhelming."

Rose only landed the job in June, and now that her name is out, she's already been meeting with Hollywood agencies to represent her for movies and television.

Given the chance by Smith to "disavow the notion right away" of Satanic overtones rumored to be associated with Lonelygirl15, Rose would only respond, "I can't say anything about the plot at all, what it has to do with. You guys have to watch and see."

But she did confirm that Bree will live on: "Oh, yeah, we will carry on the show as if nothing ever happened, and it should just get better from here on out because, now, people are gonna quit focusing on who is making this, and begin to focus more on the mysteries of the stories and all the clues in the video."