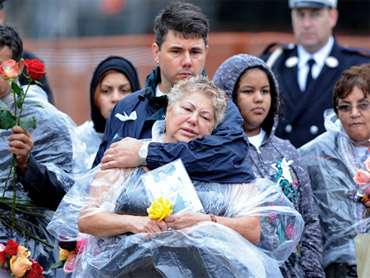 (AP Photo/Peter Foley)
Editor's Note: CBSNews.com's Andrew Cohen wrote this piece for the first anniversary of the Sept. 11 attacks. We feel it is well-worth running again this year.

It was as it should be.

One year later, America endured a day dominated by the poignant, eerie, overwhelmingly sad, long reading from the book of the dead. Nothing the politicians could say, and nothing the television and radio commentators could add, was even remotely as true or as honest as was the simple, windswept recitation at ground zero that took nearly twice as long as it was supposed to.

From the moment former New York Mayor Rudolph Guiliani read the name of Gordon M. Aamoth, Jr. until the moment, roughly two-and-a-half hours later, when the name of Igor Zukelman was read, the country was reminded of the elemental toll of last year's terror attacks.

Writing Wednesday in the New York Times, Dan Barry summed it up: "In its essence," Barry wrote, "the World Trade Center calamity is not about geopolitics, or security, or even terrorism. It is about death: a sudden, wholesale death whose aftershocks continue to rumble through the ground of the living, refusing to ease into memory's recesses in conformity with the natural order of things." If the story of Sept. 11, 2001 is essentially a story about death, the story of Sept. 11, 2002 is essentially a story about the dead and how we remember and revere them for the rest of our days and the rest of the life of this nation.

The names of 2,800 or so murdered individuals are an overwhelming concept to contemplate. I remember thinking during the Oklahoma City bombing trial of Timothy McVeigh that it took a long time to recite in court the names of the 168 victims of that terror attack, but that sad list read aloud in 1997 paled in comparison to the list read Wednesday.

Approximately 17 times more people died on Sept. 11, 2001, than died in Oklahoma City. It's not a competition, I know, but comparing the two tolls is another way of comprehending the enormity of the events last September in relation to anything and everything that had come before in our nation's history. And Wednesday's names resonate because they so clearly prove that the World Trade Center was, indeed, a place where the world met to conduct business. Unlike the names from Oklahoma City, the names from New York and Virginia and Pennsylvania were names representing virtually every corner of the world.

There were 13 Lees and two Lins. There three Wrights and five Wongs. There were siz Perezes and six Martinezes and five Ortizes and five Garcias and five Rodriguezes and a Rodrigues and four Suarezes. There was a Jawara and a Yanamadala and a Vamsikrishna and a Srinuan and a Singh and a Mehta and a Malahi and an Abad and an Ajala and a Baksh and a Carstanjen and a Dhanani and an Economos and a Foo and a Gopu and a Ho and an Iskenderian and a Jain and a Kawauchi and a Llanes and a Mardikian and a Narula and an Ogonowski and a Pepe and a Quackenbush and a Ranganath and a Salvaterra and a Takahasi and an Uliano and a two Vales and a Wang and a Yang and a Zampieri.

There were two Cohens. There was a Mohammed and a Hussain. No letter of the alphabet was spared. On September 11, 2001, 255 people with a last name beginning with the letter "S" died - alone more than the entire toll in Oklahoma City.

The names also reflect the nature of New York's marvelous Irish community, which for centuries has supplied the city with, among other things, many of its bravest (firefighters) and its finest (police officers). On Wednesday's list were 15 Murphys and 11 Lynches and four McCarthys and a McDay and a McDermott and a McDonald and two McDonnells and a McDowell. There were nine Kellys and a Kelley and a Kellett. There was a Fitzgerald and a Fitzpatrick and a Fitzsimons.

There were three Burkes and three Burnses and five Egans. There was a Judges and a Small and a Stone and a Stout and a Sword and a Felt and a Rabalais and a Gray and a Bay and a Bell and a Wall and two Temples and a Zion and a Washington and a West and an Urban and a Speer and a Salvo and a Riches and a Park and a Paris and a LaFrance and a Day and a Dale and a Booth and an Oswald and a Bright and a Blood and a Cain and a Hill and a Hunter and a Hurt and a Petti and a Petit and a Doctor.

The names listed here represent only a tiny fraction of the names read aloud Wednesday at the sites of last year's calamity. In some newspapers and on some TV networks, the names were accompanied by a tiny little picture of each victim - a great symbol that in death all were equal.

And from the names and the pictures, you can clearly see that if the aim of the terrorists was to strike at America on behalf of the rest of the world, the demise of the twin towers surely was as much of a public relations disaster as it was a victory for terror. Men and women representing dozens of nations of the world perished in the fire and ash of that day. The terrorists struck at the World Trade Center because it was a symbol of America's financial power. But the result of the strikes showed that the place was actually more a symbol of America's diversity - the source of perhaps an even greater domestic strength.

Anyway, enough. This was a day for leaving the heavy commentary aside. Do yourself a favor. Turn down the volume and just read the names, one by one, as they roll by your television screen or appear in your newspaper or on your computer. It's the fastest, easiest, surest way to comprehend what really happened one year ago and what it really means.