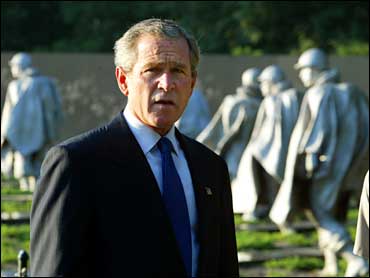 Talks on North Korea's nuclear program could be held as soon as next month, it was reported, while the United States geared up to note the 50th anniversary of the end of the Korean War.

"It's hard to predict exactly when the multilateral talks will open, but I think they can take place within next month," Ra was quoted as saying by Yonhap.

The report did not clarify whether Ra was referring to three-way talks between the United States, North Korea and China, or a U.S.-proposed meeting that would include South Korea and Japan.

"Our nation is eternally grateful for the men and women who serve today as we are for those who have served in past," he said, at the monument that proclaims: "Freedom Is Not Free."

The Department of Defense is planning a major ceremony on Sunday, the anniversary of the armistice that ended the war. A new stamp commemorating the memorial will be issued, and the president may attend.

The irony is that veterans of the so-called "Forgotten War" had to wait 50 years to be remembered.

"No one really celebrated a stalemate when the war ended. Korean veterans returned to their jobs and lives when they came back, and there have not been any celebrations, no welcome, no parades," said CBS News Military Consultant Dr. Jeffrey McCausland, professor of leadership at the U.S. Naval Academy.

The Vietnam Veterans Memorial was dedicated in 1982; the Korean War Memorial just eight years ago, for a war in which 37,000 Americans lost their lives.

The centerpiece of the Korean War Memorial are 19 stainless-steel statues depicting servicemen in the Army, the Marines, the Navy and the Air Force. Shown marching in a wedge formation as if on patrol, the statues also represent an ethnic cross-section of the United States.

"You get the very emotional outpouring of physical strain in the faces of the statues as the soldiers moved along, obviously heavily encumbered by equipment, wearing ponchos because the weather in Korea is very, very difficult," said McCausland.

So is finding peace on the Korean peninsula, half a century later.

South Korean officials recently have expressed optimism that the United States, North Korea and China will meet in Beijing soon, possibly next month, to discuss the nuclear standoff.

The nuclear dispute flared in October, when U.S. officials said North Korea admitted having a secret nuclear program in violation of international agreements.

Bolton will visit China before arriving in Seoul on Tuesday for a three-day visit, said Kim Ji-hee, an official at the South Korean Foreign Ministry's arms control and nuclear energy bureau. Bolton will meet with foreign affairs and military officials, and possibly with President Roh Moo-hyun, Kim said.

Bolton then will travel to Japan, Kim said.

On Thursday, Mr. Bush and Roh reaffirmed their commitment to seek multilateral talks in a telephone conversation.

However, North Korea wants a one-on-one meeting with the United States and says it will not give up its nuclear ambitions unless Washington agrees to sign a nonaggression treaty and provide economic aid.