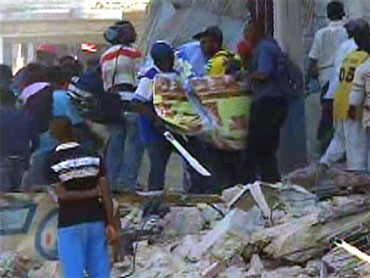 (CBS)
A desperate citizenry combined with an absence of police forces has led to increased looting in Port-au-Prince in the wake of a massive earthquake that is estimated to have killed tens of thousands.

Video footage from the city showed bands of Haitian youths armed with machetes wandering the streets looting, as the local police were largely invisible.

"The Hatian National Police are not visible at all," said David Wimhurst, a spokesman for the United Nations peacekeeping mission in Port-au-Prince. The U.N. peacekeepers are themselves devastated by casualties from the quake.

Whether the machete-wielding men posed a violent threat to the rest of the city is unclear, but what is clear is that quake survivors are taking more drastic measures as relief efforts have become bogged down in what some aid workers call a "logistical nightmare."

Matt Marek, of the American Red Cross, said the widespread looting has mainly been relegated to collapsed buildings, not undamaged stores.

But some think the looting is becoming a more serious threat.

"It is dangerous at night. Lootings were widespread and some markets were ransacked," Oxfam spokesman Cedric Perus said in a statement to the AP. .

And the problem will likely get worse in the absence of more effective relief.

U.S. State Department spokesman P.J. Crowley said there have been reports of minor looting. Crowley said the U.S. military is headed to Haiti to "stabilize" the country – a priority set forth by Haiti's own government. Up to 3,500 soldiers are en route to the quake-ravaged nation from the U.S. Army's 82nd Airborne Division to assist with disaster relief and security, with the first 100 troops set to arrive Thursday, an Army official said.

Looting and violence are not uncommon in the wake of severe natural disasters that leave local communities isolated and desperate. After Hurricane Katrina battered New Orleans, television cameras captured widespread looting and there were reports of rooftop snipers firing upon rescue and news helicopters.

In this CBS News video, men carrying machetes are seen walking the streets of Port-au-Prince