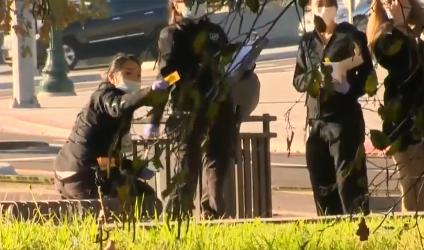 LOS ANGELES -- Investigators believe a man killed his wife in an abandoned restaurant, chopped up her body, stuffed it into a suitcase and then calmly rode with it aboard a train before he burned her remains in a parking lot, Los Angeles police said Tuesday.

After Valentino Gutierrez killed his wife last week in a shuttered restaurant in Pasadena, he dismembered her body, stuffed her remains into a large suitcase and boarded a light-rail train at a nearby station, Deputy Chief Justin Eisenberg said.

Gutierrez, 56, who was charged Thursday with murder and arson, didn't draw any suspicion on the train and hopped aboard his bicycle after he exited the train. With the suitcase in tow, he peddled from a train station to the parking lot of a Home Depot in Los Angeles, where he set the suitcase ablaze.

Detectives still haven't identified a motive in the case and coroner's officials have been unable to identify the burned remains. But police believe the victim was Gutierrez's wife, 31-year-old Tiana Alfred, who has been reported missing.

The killing was a "particularly disturbing homicide because of its sheer brutality," Eisenberg said at a news conference Tuesday announcing Gutierrez's arrest.

CBS Los Angeles reports that Gutierrez, who's bail has been set at $2 million, was arraigned in L.A. County Superior Court in Pasadena Tuesday afternoon and if convicted, he is facing a maximum sentence of life in prison.

Gutierrez did not enter a plea, prosecutors said. The name of his defense attorney was not immediately known.

Detectives were able to identify Gutierrez as a suspect after they reviewed surveillance video from the transit system that showed a man with a similar suitcase riding a light-rail train, which led investigators to Pasadena.

A police bloodhound tracked Gutierrez's movements in the neighborhood and when detectives showed photographs from the surveillance video to homeless people in Pasadena, they immediately identified Gutierrez, Capt. William Hays said.

"To dismember an individual like that is pretty grotesque," Hays said. "It takes a lot of effort and determination by an individual.