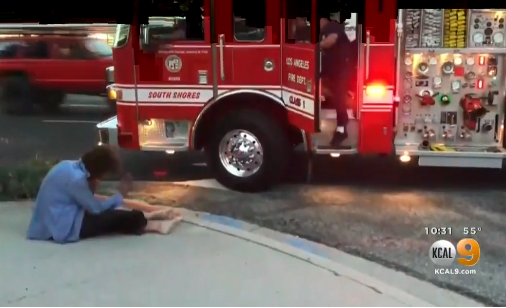 SAN PEDRO, Calif. -- Los Angeles City Councilman Joe Buscaino introduced a motion Wednesday calling for a full investigation into an incident in which a Los Angeles County Sheriff's deputy was recorded dropping off a homeless man, who displayed signs of mental illness, on the streets of San Pedro. Some believe he was dumped there, CBS Los Angeles reports.

"The video clearly showed an individual who was not in the right frame of mind, was let go holding his own shoes," Buscaino said Wednesday. "That was troubling for us."

He went on to imply the actions of the Los Angeles County Sheriff's Department put undue burden on L.A.'s emergency response resources when police and firefighters tended to the man, identified as 54-year-old Shawn Bryan.

Buscaino said earlier in a Facebook post he was "deeply concerned" after seeing the video of the deputies "unloading a homeless individual with an outstanding arrest warrant, displaying characteristics of mental illness on San Pedro streets near the border with Rancho Palos Verdes."

He said the incident, on Jan. 30, happened to fall "on the same day that the LA County Board of Supervisors called for an updated definition to make it easier for first responders to place gravely disabled persons into care."

Buscaino introduced the motion along with Councilman Mitch Englander.

"We cannot abandon people who are in serious need of services," read a tweet posted by Buscaino. "Every city must do it's part to address homelessness and mental illness."

The LASD denies the dumping allegations. They said in a statement the man asked for a ride to Pasadena where he said he lives. The deputies told him they couldn't drive him there but would take him to a bus stop.

"En route, Mr. Bryan requested that the deputies let him out a few blocks from the bus stop" to visit a local convenience store, the LASD said in a statement

Buscaino, however, said, "If you look at the location where this individual was dropped off, there is no bus stop in the near vicinity."

"Our deputies performed an act of compassionate service to the best of their abilities," the LASD said.

Capt. Michael Oreb with the LAPD has heard the allegations of dumping from the community.

"I'd like to think that other agencies would not do that, they would not try to bring some of their issues into another jurisdiction," he said. "But I think the key is to conduct a thorough investigation."