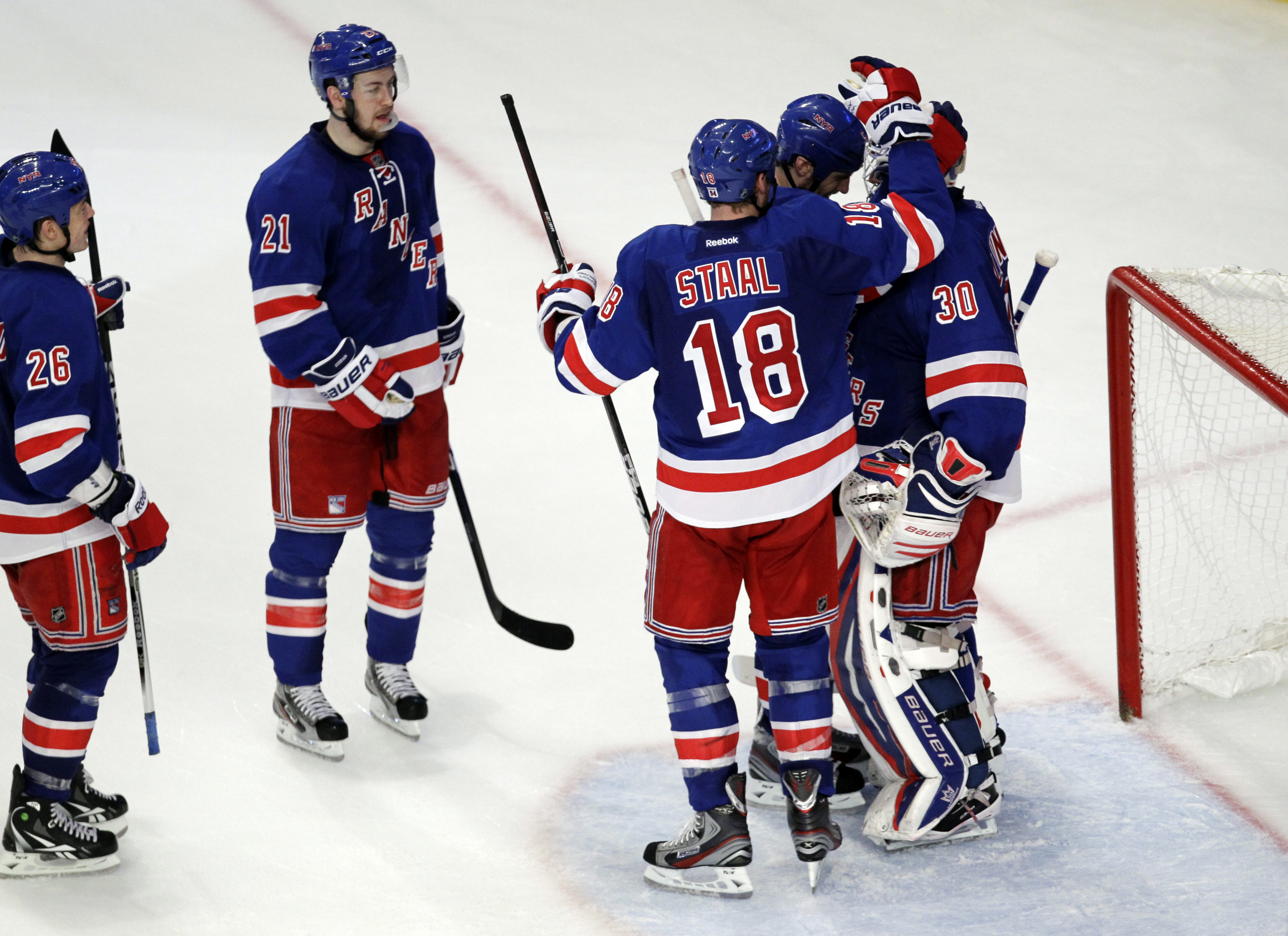 (AP) NEW YORK - After 14 games and two nail-biting playoff series wins, the New York Rangers insist they have plenty left to make a run at the Stanley Cup.

If any proof was needed, Henrik Lundqvist provided it with a shutout victory over the well-rested New Jersey Devils in the opener of the Eastern Conference finals on Monday night.

Lundqvist made 21 saves in his fifth career playoff shutout. Rookie Chris Kreider, defenseman Dan Girardi, and Artem Anisimov all had a goal and an assist in the third period as the Rangers turned a scoreless game into a 3-0 win. It came two days after New York outlasted the pesky Washington Capitals in Game 7 of the second-round series.

"I don't know where you guys get all this stuff about being tired," Rangers coach John Tortorella said. "If we're tired this time of the year, there's something the matter. We still have a month to play. You might as well not even ask me questions about being tired."

The Rangers said during their one day off before facing the Devils that they liked the rhythm of playing every other day, and didn't think the quick turnaround would affect them. The Devils, however, had been off for five days since they knocked out the Philadelphia Flyers in five games.

"It's always tough to come from a Game 7. So emotional, and everything around it, and then start over," Lundqvist said. "(Sunday) was all about regrouping, and move your focus to a new team and just a different type of game.

"I didn't really know what to expect from this game, honestly."

No team forced to play seven-game series in each of the first two rounds has gone on to win the Stanley Cup, but the Rangers are determined to be the first. The Rangers slogged through two scoreless periods and pulled out a win with a dominating third period.

The Rangers are in the conference finals for the first time since 1997, and they haven't reached the Stanley Cup finals since 1994, when they beat 22-year-old goalie Martin Brodeur and the Devils in a classic seven-game series that backed up captain Mark Messier's guarantee.

Brodeur and the Devils are making their first conference finals appearance since 2003, the year they won the Cup for the third time.

Girardi, who struggled at times with his defensive duties, got a perfect setup from Kreider and scored 53 seconds into the third period. Playing in just his 13th NHL game, all in these playoffs, Kreider sent a pass back from the right circle in the Devils' zone to the point. Girardi took long strides as he charged up ice and stepped into a shot that ripped through a screen in front by teammate Derek Stepan.

"I saw (Kreider) coming up the wall, and I was delaying to see what he was going to do," Girardi said. "I saw no one go to the point, and I kind of stepped into it and got it through."

The shot beat Brodeur for Girardi's second playoff goal this season and second in 47 career postseason games. It was a drive Brodeur said he never saw.

"We didn't finish Kreider down the board," Brodeur said. "We didn't close him out and get him off of the puck. Nobody went to him, probably a miscommunication, and he was able to lay a puck to Girardi and for a bomb."

The other assist went to 21-year-old defenseman Michael Del Zotto, who along with Kreider was only 3 when these teams last met in the conference finals in `94.

Girardi also earned a secondary assist on Kreider's power-play goal with 8 minutes remaining that made it 2-0. New York's slumping power play connected after Girardi was drilled hard from behind into the boards by Devils forward Steve Bernier.

Anisimov, who also assisted on Kreider's goal, scored into an empty net to make it 3-0 with 1:27 left.

Brodeur heard sing-song chants of "Mar-ty, Mar-ty" before the game started. Those got much louder after Girardi's goal, and even more taunting after Kreider scored as the blue-shirt wearing, towel-waving fans' excitement grew. Brodeur finished with 25 saves.

Lundqvist showed no signs of fatigue and was solid throughout in posting his second shutout of these playoffs — helped by 26 blocked shots by his teammates.

"Hank is huge for us back there," Girardi said. "We were struggling a little bit in our defensive zone and he was there to bail us out. That's what happened. He made some big saves, and in the third period we came out hard and got a couple of goals for him."

To no one's surprise, the teams were still tied heading into the final frame, but not because of a lack of chances.

Lundqvist was sharp in turning aside pucks that sneaked through the wall of teammates that blocked so many shots. He was at his best while the Rangers were on a power play late in the second period.

Zach Parise had the puck to the left of the net and snapped off a forehand that Lundqvist blocked. Parise got another whack at the rebound, and was again denied. Given one more chance with a backhander, Parise failed to break the deadlock with a short-handed goal.

It wasn't the first bit of frustration in the series opener for the Devils captain. Parise was caught from behind by hard-charging defenseman Ryan McDonagh to thwart a first-period breakaway before Parise could get a shot on Lundqvist

McDonagh made the most of his 22-year-old legs, and showed no signs of fatigue from 14 previous playoff games this season, when he also chased down Ilya Kovalchuk in the first period. Lundqvist made a stop at the end of the charge.

The Devils also peppered Lundqvist in the opening minutes of the second period. Lundqvist fought to see between a maze of players and even gave a shove to the back of teammate Anton Stralman, trying to move the defenseman out of his line of sight.

Brodeur also was sharp at the other end, even shaking off a collision with teammate Marek Zidlicky, who got tangled with Rangers forward Brandon Prust. Brodeur's mask was knocked off after the whistle.

Notes: The Rangers held an 18-17 edge in shots through 40 minutes, but New York also blocked 18 other Devils attempts. ... Brodeur, who has 24 postseason shutouts, made his 183rd consecutive playoff start for the Devils. He is the only player from the 1994 series still in the NHL. ... Kreider, who made his debut on April 16 at Ottawa after winning the NCAA championship with Boston College, has three goals in the playoffs.