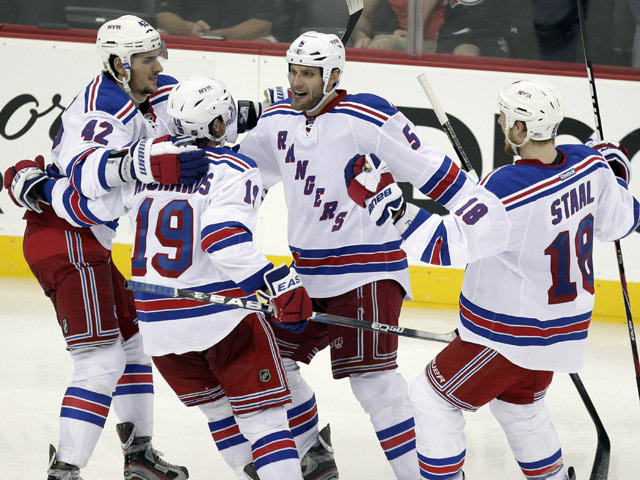 (AP) NEWARK, N.J. - Henrik Lundqvist stopped all 36 shots, and Dan Girardi, Chris Kreider and Ryan Callahan scored third-period goals to lead the New York Rangers to a 3-0 win over the New Jersey Devils in Game 3 of the Eastern Conference Finals on Saturday.

The Rangers scored two goals only 1 minute, 57 seconds apart early in the third to help them take a 2-1 series lead.

Lundqvist was busy from the opening faceoff en route to his second shutout of the series and third in the postseason. Callahan iced it with an empty-netter late in third.

Game 4 is Monday in New Jersey.

Not even playing on home ice, where they had won four straight, was enough to help New Jersey. The Rangers have won every Game 1, lost each Game 2, and rebounded to win Game 3 in every round this postseason. Each preceding series, of course, saw them win the all-important last one: Game 7.

Kreider, a rookie called up during Round 1 vs. Ottawa, has scored in every game of this series.

Lundqvist was fantastic as he showed again why he led the Rangers to an Eastern Conference-high 109 points. He stoned Adam Henrique on a nice backhander late in the second period to keep it scoreless entering the third, setting the stage for New York's late magic.

He also toyed with Ilya Kovalchuk all game and stopped him on a nice breakaway in the second. Kovalchuk, who scored in Game 2, couldn't get untracked and neither could the rest of the Devils.

Especially not with the way Lundqvist shined in net.

The Rangers opened the third ready to go against Martin Brodeur and found a way to give Lundqvist a needed cushion.

With Devils defenseman Bryce Salvador in the penalty box, Girardi pushed a slow wrist shot past Brodeur's glove side, off a faceoff win by center Brad Richards. Brodeur could have easily stopped the point-blank shot, especially with no traffic in front of the net.

The Rangers could have squeezed in a pair of John Tortorella press conferences before their next goal.

Rangers defenseman Ryan McDonagh wristed a shot along the ice toward Brodeur that got through to the crease, eventually being deflected by Kreider and around a prone Brodeur. Devils defenseman Marek Zidlicky was out of position at the faceoff circle, when Kreider sneaked in behind him and poked it in.

The Devils kept up the pressure the rest of the way, but got nowhere with an ineffective power play. And as they skated off dejectedly toward their locker room, they could only look back and wonder how they came up empty with so many shots on Lundqvist.

New Jersey spent most of the game sticking it to the Rangers all over the ice. The Devils dominated and outshot the Rangers, 26-14, through the first two periods.

In the second period, Rangers winger Brandon Prust threw a hard right elbow into the back of Anton Volchenkov's head that knocked the defenseman down in a heap. No penalty was called and the crowd howled in protest. Devils coach Peter DeBoer was furious at the non-call and was yelling on the bench as he looked up at the replay overhead. Volchenkov eventually got to his feet and later returned to the ice.

Lundqvist was at his best in the third, snaring Kovalchuk's one-timer to turn away any attempt at a late Devils rally.

The Devils pulled Brodeur with 2:33 left in the game and that backfired only 10 seconds later when Callahan knocked in the easy look.

The three-goal cushion allowed the Rangers fans in attendance to boast a bit as their rivals struggled. "Let's go Ran-gers" chants were prevalent, as were derogatory "Mar-ty" chants toward the Devils' veteran netminder.

Notes: The Rangers scratched D Stu Bickel, who had played all 16 postseason games, and replaced him with D Steve Eminger. Eminger played his second game. ... This is the only game in the East Finals with two days off leading up to it. From Game 4 on, the series will resume every other day. ... Rock star and New Jersey native Jon Bon Jovi was at the game and was shown on the Jumbotron in the second period. ... Patrik Elias took a stick to the face in the first period and went to the locker room. He later returned.