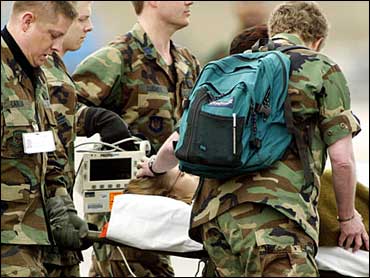 A U.S. Marine who was part of the unit that helped rescue Army Pfc. Jessica Lynch died in a car crash on his first weekend home since returning from Iraq.

Josh Speer was killed when his car veered off the road in Greenville County, S.C., overturned several times and ran into a tree at about 8 a.m. Sunday morning. The 21-year-old soldier was heading to see his fiancee.

Capt. Shawn Turner, a Marine Corps spokesman, said Speer served in the Marine unit that aided in Lynch's rescue. Turner said details of what Speer's unit did to help Lynch, the Army private captured by Iraqis, were unavailable.

Speer's family said he had returned home to Marietta on Thursday. Holly Coupe, his fiancee, said Speer wrote her from Iraq, promising that, "The first thing I do when I get back is put a ring on your finger."

The couple went to a local amusement park over the weekend, but she expected Speer to give her the ring when they were to go hiking next week.

Speer was the youngest of seven children. His family said he planned to make the Marine Corps his career.

"He loved God, his family and his country," said his mother, Shirley Speer.

John Speer, the Marine's father, said he was proud of his son's service, which he recalled was brought on by the terror attacks of Sept. 11, 2001.

"We trained our children to be patriotic and God-honoring people," John Speer said.

William Coupe, who had been expecting to become Josh Speer's father-in-law, said he was proud of Speer. "Out of everybody you want your daughter to marry, he's the guy," he said. "I loved him like a son."