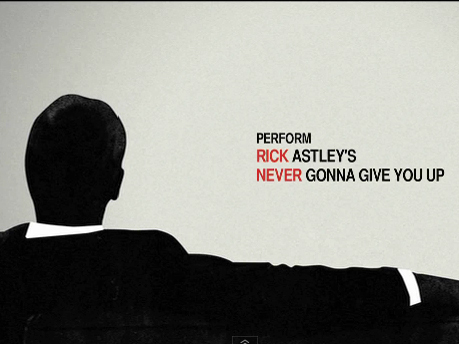 (CBS News) The amazing television series "Mad Men" is set in the turbulent and ever-changing world of the 1960s. The song "Never Gonna Give You Up" is a 1987 hit single by Rick Astley. So what exactly do these two seemingly unlike things have in common? The video above, that's what.

The clever and fun television made into music remix was done by Richard Sandling who writes:

The Cast Of Mad Men Perform Rick Astley's 1987 Hit Never Gonna Give You Up. Footage Taken From Seasons 1 - 4 Of Mad Men. This video was made for Richard Sandling's Perfect Movie, a monthly stand up comedy show about films at The Leicester Square Theare, London.

And since your blogger here does so love "Mad Men" and the Internet phenomenon that is Rick Astley's "Never Gonna Give You Up", that means Richard Sandling has just earned himself a big triple-rainbow salute of awesome from all of us here at The Feed.  Oh, and by the way, you should probably consider yourself rickrolled. Yeah, that's right. That just happened.  And to check out more work by Richard Sandling, you can visit his YouTube page by clicking here.