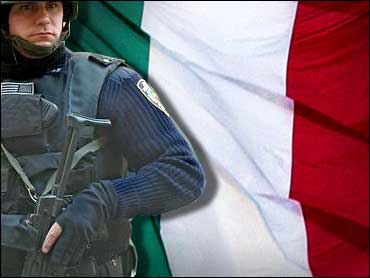 The FBI arrested a reputed U.S. mobster Wednesday on charges he provided protection for a Sicilian counterpart operating in Florida - part of an international sweep aimed at further crippling the storied Gambino organized crime family and disrupting its ties to the Italian mob.

Wiretaps and surveillance revealed that suspected Gambino solider Gaetano Napoli Sr. had a "close relationship" and "communicated extensively" with Roberto Settineri, a suspected member of the Sicilian Mafia facing charges in Florida and Italy, according to court papers filed by federal prosecutors. They said Napoli helped settle a dispute last year between Settineri and members of the Colombo crime family during a "sit down" at a social club in Pompano Beach, Fl.

Settineri was caught on tape telling Napoli he wanted his participation to "show everybody good manners" - what authorities say was a reference to the La Cosa Nostra custom that only made members handle such negotiations.

Napoli, 71, and a son, 44-year-old Gaetano Napoli Jr., were arrested Wednesday in North Carolina on extortion, bankruptcy fraud and other charges contained in an indictment unsealed in federal court in Brooklyn. A second son named in the indictment, Thomas Napoli, 31, was arrested in New York and was to be arraigned later in the day.

FBI agents also arrested Settineri, 41, on Wednesday in Florida hours before he was to fly from Miami to Italy, authorities said. He and another man were facing obstruction of justice and conspiracy charges alleging they agreed to destroy documents conceal assets that were part of the probe. A third man also was in custody in Florida as part of the case.

"The criminal dominion of La Cosa Nostra and the Sicilian Mafia is international," U.S. Attorney Benton Campbell said in a statement. "But ... both countries' efforts to push back the tide of international organized crime have achieved success."

New York's Gambino family has been the subject of a steady stream of government indictments and prosecutions since John Gotti, the so-called "Dapper Don," was sentenced to life in prison in 1992. He died in 2002.

In 2008, the Gambinos were the target of one of the largest Mafia takedowns in recent memory, with federal agents rounding up 62 reputed members and associates and charging them with gangland crimes spanning three decades - including the brutal slaying of a court officer and extortion at a failed NASCAR track.

That case also coincided with a series of raids in Italy targeting alleged members of Mafia families who control drug trafficking between the two sides of the Atlantic. Authorities said at the time that the investigations, though technically unconnected, signaled an international attempt to sever Gambino ties to Sicily.