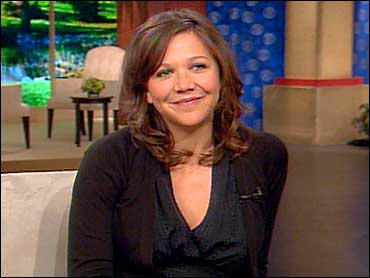 Maggie Gyllenhaal is one of the hardest-working stars in Hollywood. She appears in "World Trade Center" and "Trust the Man," both in theaters now, and plays the lead in the emotional film "Sherrybaby," which opens next Friday.

On top of all that, she's expecting a baby this fall.

"I am feeling good," she said. "I'm starting to get a little tired. But good."

Gyllenhaal, 28, said her entire family, including her brother, "Brokeback Mountain" star Jake Gyllenhaal, is very excited for the new edition, but she is finding herself constantly dodging paparazzi who want a shot of her belly.

"They like pregnant actresses," she told The Early Show. "I try my best to stay out of that, but it's harder and harder."

As her personal life progresses, so does her career. Gyllenhaal said she knew within 10 pages of reading "Sherrybaby" that she wanted to make the movie.

"I knew it was unusual," she said. "It was exceptional in some ways. Even though it's this teeny tiny movie, which it is, a movie we made for nothing and fought so hard to make, I knew almost immediately that it was really worth it."

The film is about Sherry Swanson, who tried to reclaim her life, reunite with her daughter and get a job after struggling with a heroin addiction and spending time in prison.

Swanson was someone Gyllenhaal said she had to challenge herself to play. It was an emotional experience because the character faced such unimaginable obstacles. Gyllenhaal said Swanson had such a difficult life that she never was able to experience all the "anger and pain and hurt that is coming at her."

"I think she's in such dire straights that all she has are these kind of naive, fierce hope," she said. "And while I was playing the part I was looking for pleasure and hope in everything, even in these really bleak things. And so it was really mostly after I finished the movie that I felt pain."

Millions of households could get $50 monthly internet subsidy

The agency approved a $3.2 billion program to help low-income families and people who lost jobs in the last year.