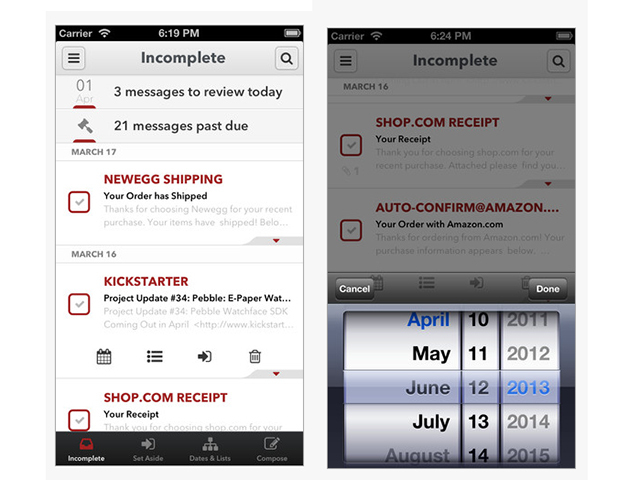 (MoneyWatch) One of the reasons we struggle so much with email is the efficiencies that are built into most email clients. You might recall, for example, that I've previously suggested using technology to "defer" an email until you are able to deal with it. But most email programs have no way to hit "snooze" on a message for a day or a week; it just sits there in your inbox, clogging up your workflow.

The good news is that there's a mail app for Apple's mobile platform, iOS, that goes a long way toward solving this problem.

Mail Pilot is a new app that's optimized for both the iPhone and iPad, letting you turn your inbox into something of a to-do list. The main feature: You can defer email to a later date. It'll disappear from your inbox until it's needed, then reappear like clockwork. That means you can streamline your inbox and only handle messages when appropriate.

If you think that sounds a lot like another app I've written about -- Mailbox-- you're right. In many ways, Mail Pilot and Mailbox are quite similar, though the former actually has been in development for much longer (it was a successful Kickstarter campaign a year ago). Now it's out of beta and available in the iTunes store.

The two programs are different in a couple of important ways. First, and to its credit, Mail Pilot works with all IMAP mail services, making it vastly more useful than the Gmail-only Mailbox option. And while Mailbox is routed through third-party servers, Mail Pilot isn't. There are a number of pros and cons to this approach, but perhaps the most relevant one is that this means Mail Pilot doesn't support a "push" system, so you have to start the app to check if you have new mail. Heck, there isn't even any notification system, so you have to open the app to see that a deferred message has reasserted itself.

The other significant limitation is that while Mail Pilot supports Gmail and your IMAP email, there's no Exchange mail support. It's not truly a universal inbox.

All that said, Mail Pilot is a superb mail client that delivers the recent promise of Mailbox to a much broader range of mail users. And while I'd love to recommend it without reservation, it is pricey at (I hope you're sitting down) at $15. That's a pretty significant price for any iPhone app, and I suspect most people will think twice before plunking down that much cash for an email app. Which is unfortunate, because it does have the potential to improve your email productivity.