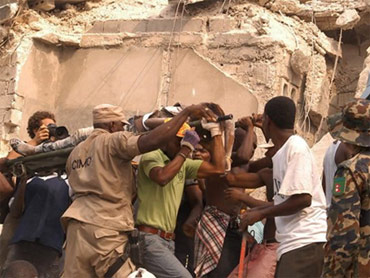 The strongest earthquake in more than 200 years rocked Haiti on Tuesday, collapsing a hospital where people screamed for help and heavily damaging the National Palace, U.N. peacekeeper headquarters and other buildings. U.S. officials reported bodies in the streets and an aid official described "total disaster and chaos."

United Nations officials said a large number of U.N. personnel were unaccounted for.

Communications were widely disrupted, making it impossible to get a full picture of damage as powerful aftershocks shook a desperately poor country where many buildings are flimsy. Electricity was out in some places.

Carel Pedrel, Aradio show host in Haiti, described to CBS News a scene of darkness and aftershocks in the Port-au-Prince.

"It's really dark, there's no electricity. There's a lot of cars on the streets, and people are afraid to get inside of the house. We cannot expect electricity for anytime soon,'' said Pedrel.

"I see a lot of people on the streets, crying for help. I know there's a lot of people under the building collapse. A lot of traffic, people crying, people bleeding. It's a disaster,'' Pedrel said.

Karel Zelenka, a Catholic Relief Services representative in Port-au-Prince, told U.S. colleagues before phone service failed that "there must be thousands of people dead," according to a spokeswoman for the aid group, Sara Fajardo.

"He reported that it was just total disaster and chaos, that there were clouds of dust surrounding Port-au-Prince," Fajardo said from the group's offices in Maryland.

State Department spokesman P.J. Crowley said in Washington that embassy personnel were "literally in the dark" after power failed.

"They reported structures down. They reported a lot of walls down.They did see a number of bodies in the street and on the sidewalk that had been hit by debris.So clearly, there's going to be serious loss of life in this," he said.

Alain Le Roy, the U.N. peacekeeping chief in New York, said late Tuesday that the headquarters of the 9,000-member Haiti peacekeeping mission and other U.N. installations were seriously damaged.

"Contacts with the U.N. on the ground have been severely hampered," Le Roy said in a statement, adding: "For the moment, a large number of personnel remain unaccounted for."

"Buildings collapsed all over the place," he said. "We have lives that are destroyed. ... It will take at least two or three days for people to know what's going on."

"Everybody is just totally, totally freaked out and shaken," said Henry Bahn, a U.S. Department of Agriculture official visiting Port-au-Prince. "The sky is just gray with dust."

An Associated Press videographer saw the wrecked hospital in Petionville, a hillside Port-au-Prince district that is home to many diplomats and wealthy Haitians, as well as many poor people. Elsewhere in the capital, a U.S. government official reported seeing houses that had tumbled into a ravine.

Kenson Calixte of Boston spoke to an uncle and cousin in Port-au-Prince shortly after the earthquake by phone. He could hear screaming in the background as his relatives described the frantic scene in the streets. His uncle told him that a small hotel near their home had collapsed, with people inside.

"They told me it was total chaos, a lot of devastation," he said. More than four hours later, he still was not able to get them back on the phone for an update.

Haiti's ambassador to the U.S., Raymond Joseph, said from his Washington office that he spoke to President Rene Preval's chief of staff, Fritz Longchamp, just after the quake hit. He said Longchamp told him that "buildings were crumbling right and left" near the national palace. He too had not been able to get through by phone to Haiti since.

With phones down, some of the only communication came from social media such as Twitter. Richard Morse, a well-known musician who manages the famed Olafson Hotel, kept up a stream of dispatches on the aftershocks and damage reports. The news, based mostly on second-hand reports and photos, was disturbing, with people screaming in fear and roads blocked with debris. Belair, a slum even in the best of times, was said to be "a broken mess."

The earthquake had a preliminary magnitude of 7.0 and was centered about 10 miles west of Port-au-Prince at a depth of 5 miles, the U.S. Geological Survey said. USGS geophysicist Kristin Marano called it the strongest earthquake since 1770 in what is now Haiti. In 1946, a magnitude-8.1 quake struck the Dominican Republic and also shook Haiti, producing a tsunami that killed 1,790 people.

The temblor appeared to have occurred along a strike-slip fault, where one side of a vertical fault slips horizontally past the other, said earthquake expert Tom Jordan at the University of Southern California. The earthquake's size and proximity to populated Port-au-Prince likely caused widespread casualties and structural damage, he said.

"It's going to be a real killer," he said. "Whenever something like this happens, you just hope for the best."

Most of Haiti's 9 million people are desperately poor, and after years of political instability the country has no real construction standards. In November 2008, following the collapse of a school in Petionville, the mayor of Port-au-Prince estimated about 60 per cent of the buildings were shoddily built and unsafe in normal circumstances.

Tuesday's quake was felt in the Dominican Republic, which shares a border with Haiti on the island of Hispaniola, and some panicked residents in the capital of Santo Domingo fled from their shaking homes. But no major damage was reported there.

In eastern Cuba, houses shook but there were also no reports of significant damage.

"We felt it very strongly and I would say for a long time. We had time to evacuate," said Monsignor Dionisio Garcia, archbishop of Santiago.

The few reports emerging from Haiti made clear the country had suffered extensive damage.

"Everybody is just totally, totally freaked out and shaken," said Henry Bahn, a U.S. Department of Agriculture official visiting Port-au-Prince. "The sky is just grey with dust."

Bahn said he was walking to his hotel room when the ground began to shake.

"I just held on and bounced across the wall," he said. "I just hear a tremendous amount of noise and shouting and screaming in the distance."

Bahn said there were rocks strewn about and he saw a ravine where several homes had stood: "It's just full of collapsed walls and rubble and barbed wire."

In the community of Thomassin, just outside Port-au-Prince, Alain Denis said neighbours told him the only road to the capital had been cut but that phones were all dead so it was hard to determine the extent of the damage.

"At this point, everything is a rumour," he said. "It's dark. It's nighttime."

Former President Bill Clinton, the U.N.'s special envoy for Haiti, issued a statement saying his office would do whatever he could to help the nation recover and rebuild.

"My thoughts and prayers are with the people of Haiti," he said.

Haitian musician Wyclef Jean urged his fans to donate to earthquake relief efforts, saying he had received text messages from his homeland reporting that many people had died.

"We must think ahead for the aftershock, the people will need food, medicine, shelter, etc.," Jean said on his Web site.

Brazil's government was trying to re-establish communications with its embassy and military personnel in Haiti late Tuesday, according to the G1 Web site of Globo TV. Brazil leads a 9,000-member U.N. peacekeeping force there.

Felix Augustin, Haiti's consul general in New York, said he was concerned about everyone in Haiti, including his relatives.

"Communication is absolutely impossible," he said. "I've been trying to call my ministry and I cannot get through. ... It's mind-boggling."