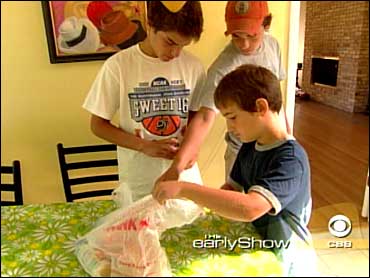 About one-quarter of American adults come from divorced families, and many say they missed one parent terribly. Now there's a movement in some states to do divorce "better."

One approach uses custody arrangements that include both parents. The Early Show's Tracy Smith visited a family living with a divorce that even King Solomon would love.

Drew Eichner and Lynne Baker are divorced but they have a unique custody arrangement that allows their three boys, 14-year-old twins Joe and Sam, and 8-year-old Jack, to split their time equally between their parents' houses.

Monday and Tuesday are spent at Lynne's house, while Drew has his boys on Wednesday and Thursday; weekends are switched off.

It's perfect equity for mom and dad, but the kids move back and forth two or three times a week

The twins tell Smith it's not hard to get used to it, and jokingly call it "divorce mode."

The houses are within a few minutes of each other, but life still gets complicated.

"Sometimes you just wanna rest, give my brain a little rest and just lay down," says Jack.

Welcome to the world of 50-50 joint custody. It's part of a larger "shared parenting" trend initiated by fathers' groups who say that traditional family custody law diminishes the role of dads.

"Fathers are pushed to the margins of their children's lives," says fathers' rights advocate Glenn Sacks. "You need shared parenting in order to protect that relationship with your children."

"I've taken on a lot more responsibility than I ever thought I would," says Drew. He now spends more time with the boys now than he did when he was married.

"They need their mom for certain things, but they have an important — a really important — bonding relationship with their dad," says Lynne.

The 50-50 arrangement is a well-planned, deliberate effort. Each house has the boy essentials: television, computer, basketball hoop. Mom's house has a dog and a cat and there are fish at dad's.

The arrangement is flexible and the exes get along. for Drew and Lynne, it is a good divorce.

"My divorce is better than plenty of marriages I've seen, including my own," Lynne says.

Asked why they got divorced, Drew says laughing: "Oh don't ask. Yeah. It was not a match made in heaven, and it just didn't work. We had different views on the world."

But those differing views create more havoc for kids in a divorce. Elizabeth Marquardt's new study with nearly a thousand adult children of divorce looks at the long term effects of split families.

"It's the child of divorce who spends the rest of their childhood traveling between two often increasingly different worlds, trying alone to make sense of their parent's very different values, and beliefs, and ways of living," Marquardt says.

Children who travel back and forth frequently face considerable stress.

"It's very hard. And to not know which place to really call home base," says Lynne.

For the boys, there is one overwhelming issue.

"It's hard to keep track of my stuff," Jack says.

The twins seem to take it in stride. One of the boys tells Smith, "I'd rather lose things than not see my parents."

The 50-50 custody is clearly not for every divorce. For Drew and Lynne, it works because they work hard at it every day, one week at a time.

"You know, they need both of us, they really do, and we need them. I mean, I need them," says Lynne. "I just hope that they feel like they have two real homes, and they have double what other people have."

Not everybody can do this. Drew and Lynne live close by, they're flexible and communicate well, and they can afford two nice houses and a nanny.

On Thursday, Smith takes a serious look at an all-too-common divorce dynamic that is really tough on kids: when one parent turns the child against the other parent. Some family lawyers call it "parental alienation."