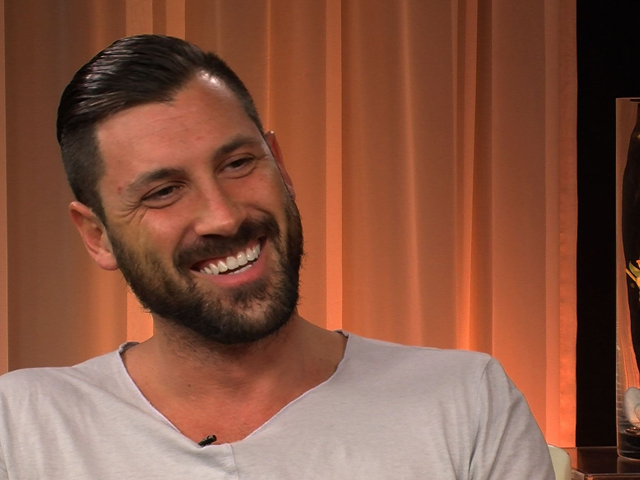 Maksim isn't showing off his fancy footwork on "Dancing with the Stars" this season, but that doesn't mean he's hung up his dancing shoes completely.

Chmerkovskiy, sometimes referred to as "the bad boy of the ballroom," recently ended his Broadway stint in "Forever Tango" and has been busy heading up six dance studios in the New York area. And the 33-year-old dancer just partnered with the USO to help support this year's Dance for the Troops campaign. The grassroots fundraising program is designed for clubs, schools and communities to better the lives of the troops and their families with a dance fundraiser. All the money goes directly to support troops and their families, and it can all be coordinated at the USO's Dance for the Troops website.

"The website collects everything, so you don't have to do anything but want to help," Chmerkovskiy said during a visit to CBSNews.com. "Everything is done for you."

Chmerkovskiy said the cause is even more important now amid the government shutdown. "The people that get hurt by this ridiculous political turmoil are the ones that haven't done anything wrong other than try and protect us and go out and put themselves in danger for the freedoms that we have."

Dances run throughout the year, but Kelli Seely of the USO said, "We're focusing on the holiday time period because of Veteran's Day and so many troops and their families are separated during the holidays that we really want to show our extra support...Out troops have told us that the most meaningful thing to them is knowing that people at home are thinking of them. So the opportunity to get pictures of people hosting their dance parties, and being able to show those to the troops means the world to them."

Chmerkovskiy said he became familiar with the USO after joining "Dancing with the Stars." "Celebrities on the show introduced me to the USO tours. And my brother and I were always interested in doing something like that," he said.

His younger brother Val, meanwhile, is competing on the current season of "DWTS" with celebrity partner Elizabeth Berkley. Chmerkovskiy says that although he's no longer on the show, he's definitely watching this season and checks in with his brother all the time.

And he's keeping the door open to return one day: "I never walked away, slammed the door...and said, 'I'm never coming back.' I think eight years of doing something -- the type of person I am, I am not gonna be there until they tell us the show is off air and we're done with it, or until I feel like I can't dance anymore. I want to be able to capitalize. We all know why we're there. Everyone is doing something to better their lifestyle, to better their life. Period."

The Ukrainian-born dancer has been trying to better his own lifestyle these days. Chmerkovskiy is taking some acting classes and says he hopes to take on speaking roles in theater and film.

"I'm not doing anything to prove anything to anybody. I just want to see if I'm capable of it...I really want to be good at everything that I do," he said. "I'll put time into it. If it works, then you'll see me the big screen and on the Broadway stage. If it doesn't, I'll just open up a bunch of studios. We'll be good either way."

Chmerkovskiy talks more about his plans, along with "DWTS" and the USO in the video above. Also see what he says when we ask about his reported romance with model Kate Upton.