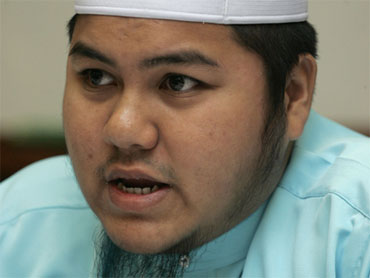 They include four men from Syria, two from Nigeria and one each from Yemen and Jordan, said Syed Ibrahim Syed Noh, head of a rights group that assists people held under Malaysia's Internal Security Act, which allows indefinite detention without trial.

They were among 50 people arrested by police while attending a religious talk by a Syrian university lecturer on Jan. 21 at a home near Kuala Lumpur, Malaysia's largest city, Syed Ibrahim said. The others were later released.

The government-linked New Straits Times newspaper said foreign anti-terrorism agencies told authorities that the suspects were in Malaysia and were linked to Umar Farouk Abdulmutallab, a young Nigerian man accused of trying to detonate a bomb hidden in his underwear during a flight from Amsterdam to Detroit on Christmas Day.

The newspaper did not say how it obtained the information or how they were linked.

Home Minister Hishammuddin Hussein refused to confirm the report or give other details Thursday, saying it might jeopardize investigations. He said the detainees posed a "serious threat" to security and their arrests were based on cooperation with foreign intelligence agencies.

"This is a very good wake-up call for us because the playground for terrorists is no longer just one nation. The whole world is their playground," he said.

The suspects include students at a Malaysian university, said Syed Ibrahim, the rights activist. He urged the government to either charge them in court or release them.

Activists identified one detainee as Aiman Al Dakkak, a Syrian university lecturer who has been living in Malaysia since 2003. He gave regular religious classes but did not advocate terrorism to his students, said Muhamad Yunus Zainal Abidin, a Malaysian who was arrested at the class and released several hours later.

Interrogators did not ask those freed about any ties to Abdulmutallab, Muhamad Yunus told a news conference.

Al Qaeda leader Osama bin Laden claimed responsibility for the Christmas Day bombing attempt in an audio message released over the weekend, and vowed further attacks on the U.S.

The message suggests that bin Laden wants to show he remains in direct command of al Qaeda's many branches around the world.

Over the past decade, Malaysian authorities have held more than 100 militant suspects, mainly alleged members of the al Qaeda-linked Southeast Asian network Jemaah Islamiyah, which has been blamed for attacks including the 2002 bombing on the Indonesian island of Bali that killed 202 people.

Most were released after being held for years in a northern prison center. Authorities say they were rehabilitated and no longer posed a threat. None was ever charged in court.