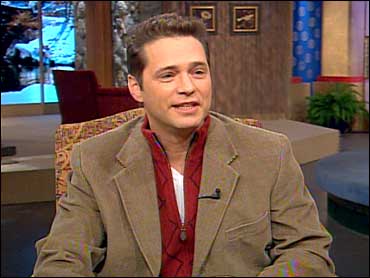 When "Love Monkey" premieres on CBS Tuesday night, it will have some critics calling it a male "Sex and the City" and its own cast members wondering what the heck its title means.

Jason Priestley, who became a TV star and teen heartthrob when he starred in "Beverly Hills 90210" for nine years, is among the ensemble in "Monkey."

He plays Mike Freed, a happily married man in a group of single friends. Freed is also about to become a father.

The Early Show co-anchor Rene Syler asked Priestley how the show got its name.

"Kyle Smith wrote a book called, 'Love Monkey,' " Priestley said. "The show takes the title from the book. The show kind of picks up where the book sort of left off. So, the book is sort of a template to get us started, and we go on from there.

"What is the 'love monkey'? That's a very good question. We talk about it on the set. No one can really come up with a concrete answer."

Some critics say "Love Monkey" is a male version of "Sex and the City,"
but Priestley's not biting.

"There are things that are similar about the shows," he says. "We both shoot in New York. There's a voiceover utilized in the show, but I really think that calling this show a male 'Sex and the City' is doing a disservice to both shows, to be perfectly honest.

" 'Sex and the City' was a phenomenal show. …Our show doesn't really have anything to do with that, other than — well, there's some sex and it happens in the city. So I guess in that way …"

"We sort of have a mantra on the set, and that is to keep the audience trying to catch up to the last five jokes we've told because we're already on to the next five," he says. "We improvise quite a bit. … There's so many wonderful, talented actors on the show. We've all been doing this a long time. Everybody comes with a lot of ideas and things they want to do every day. It frees us all up to have a lot of fun and improvise a lot and come up with a lot of gags."

He adds that he thinks it's important for ensemble casts to get to know each other well, off-screen as well as on.

"I've worked on other shows where the cast really wasn't close and didn't really get along," Priestly says. "On this show, we all get along famously. We all hang out together all the time.

"Just a bunch of guys hanging around. It's true. It's been really fun. We have a good time making the show."

Priestley says CBS holding the show to be a midseason replacement should work in its favor.

"I feel, rolling a show out now, you're not caught in that September glut of new shows," he says. "It kind of gives a show like this, I think, a better chance to find an audience. It's not like anything else on TV. … To have a little more breathing room at this time of year, I think, will help us find an audience."

He concedes he "absolutely" used to be concerned about being typecast as his "90210" character, Brandon Walsh.

"You know, when there are pillows and dolls and — you know, you see all this stuff at the store and you're like, 'What is this? Where did this come from?' "