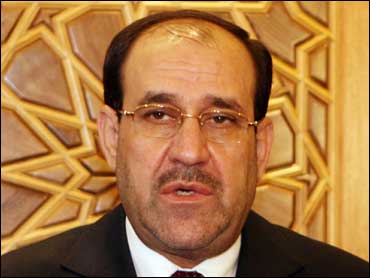 Iraq's beleaguered prime minister lashed out Sunday at his U.S. critics, saying they don't appreciate the country's achievements and fail to understand how difficult it is to rebuild after decades of war and dictatorship.

Prime Minister Nouri al-Maliki said some of the criticism from Washington in advance of this month's progress reports has been counterproductive.

"Such statements sometimes cross the limits and send signals to terrorists luring them into thinking that the security situation in the country is not good," al-Maliki said without offering specific example.

He said U.S. critics may not know "the size of the destruction that Iraq passed through" and do not appreciate "the big role of the Iraqi government and its achievements, such as stopping the civil and sectarian war."

But the Democratic-controlled Congress is growing increasingly frustrated with the slow pace of political reform in Iraq. Sen. Hillary Clinton and Sen. Carl Levin, chairman of the Senate Armed Services Committee, have called for al-Maliki to be replaced.

The criticism comes as U.S. Ambassador Ryan Crocker and the top American military commander, Gen. David Petraeus, prepare to deliver reports to Congress during the week of Sept. 10 on the degree of progress achieved since President George W. Bush ordered nearly 30,000 more troops to Iraq.

A draft report by the Government Accountability Office concluded Iraq has satisfied only three of 18 benchmarks set by Congress for measuring progress and partially met two others.

None of those five benchmarks are the high-profile political issues such as passage of a national oil revenue sharing law that the U.S. has said are critical to Iraq's future.

During an interview broadcast Sunday by Iraqi state television, Crocker also urged patience with the Iraqis as they try to reach power-sharing agreements among Sunnis, Shiites and Kurds.

"After 35 years of injustice under Saddam Hussein, there are some problems since liberation and the problems of 40 years cannot be solved in a year or two," Crocker said, speaking in Arabic. "What is important is that there is progress."