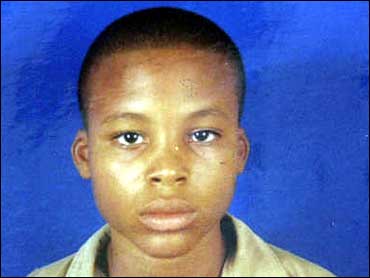 Police and prosecutors are on solid legal ground with a confession that 17-year-old sniper suspect John Lee Malvo allegedly made during a lengthy interrogation, but leaks of the purported statement could hurt the case, some legal experts said.

Malvo's lawyers said the seven-hour grilling by police last week — during which he allegedly admitted to some shootings, according to The Washington Post — was unconstitutional because his court-appointed guardian tried to stop to it. They say they will seek to suppress any incriminating statements.

Meanwhile, the 13-year-old boy critically wounded by the Washington-area sniper as he walked to school more than a month ago has been released from the hospital.

The boy, whose name has not been released because he is a considered a witness to a crime, left Children's Hospital in Washington on Monday, said hospital spokeswoman Marissa Garis. She would not say where he went or if any follow-up treatment would be needed.

The teen was hit by a single bullet in front of Benjamin Tasker Middle School in Bowie and suffered chest and abdominal wounds. The bullet damaged his spleen, stomach, pancreas, lung and diaphragm, parts of which had to be removed.

Authorities believe Malvo and his fellow suspect, John Allen Muhammad, 41, are responsible for a three-week string of shootings in the Washington, D.C., area that killed 10 and wounded three, including the teen. They are suspected in more than a half-dozen other shootings around the country.

Most legal experts say defense lawyers will have a tough time persuading a judge to toss out the statement as long as Malvo knew of his right to a lawyer and voluntarily waived it.

"Virginia tends to be a pro-prosecution state, and prosecutors could very well succeed in getting it admitted," said George Washington University law professor Jonathan Turley.

Robert Cleary, a former U.S. attorney who prosecuted Unabomber Theodore Kaczynski, said the mere fact that Malvo's guardian or lawyer tried to stop the questioning is not enough to have it thrown out.

"Those are constitutional protections that belong (to Malvo), not to his lawyer or his family lawyer," said Cleary, who is now in private practice.

Malvo's attorney, Michael Arif, said Sunday "police are flooding the media and poisoning the jury pool with their own paraphrasing and subjective interpretations of statements made during an unconstitutional interrogation." He suggested police were afraid a judge would not allow the statement to be heard in court.

Cleary said it's not surprising defense lawyers would want to suppress the statement.

"None of us know the circumstances under which his confession was taken," he said. For defense lawyers to be successful, they would have to show "that his will was somehow overborne by the circumstances" of the interrogation.

Some legal experts pointed out leaks in high-profile cases can hurt a prosecution's case.

Northwestern University criminal law professor Paul Robinson said for defense attorneys, the leak in the Malvo case "creates an issue that they can complain about on appeal that they wouldn't otherwise have had — it creates the potential for reversal on appeal."

But Beth Wilkinson, a former federal prosecutor who dealt with leaks in winning a death sentence against convicted Oklahoma City bomber Timothy McVeigh, took a different view. "It's obviously not good for the prosecution, and it's not fair to the defendant," she said. "But it's rarely ever fatal to a case."

Steven Benjamin, a defense attorney in Richmond, Va., questioned the need for police to risk having a confession tossed out.

"The use of these tactics raises the question of whether there are problems with their case," he said.

Fairfax County Commonwealth's Attorney Robert F. Horan Jr. declined to comment on Malvo's statement, and was angered people are making assumptions about the case based on reports from anonymous sources.

"Within a time frame of 48 hours, it's become gospel," Horan said of the purported confession that was first reported by The Washington Post.

He said he is "as outraged as the defense attorneys" statements were leaked and said such leaks can potentially harm a defendant's right to a fair trial.

"No law-enforcement officer, regardless of rank, should be leaking information," Horan said.

But he said leaking information is not a prosecutable offense. "Unfortunately they can do it if they want to," he said.

Virginia was given first shot at prosecuting the pair because the state is considered most likely to impose the death penalty. Malvo is being prosecuted for the Oct. 14 slaying of FBI analyst Linda Franklin outside a Home Depot in Falls Church, Va. He allegedly claimed responsibility for the killing.

Muhammad is being prosecuted in another Virginia county for the Oct. 9 slaying of Dean Harold Meyers, who was gunned down at a gas station in Manassas, Va.