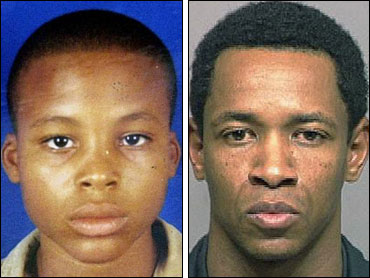 John Lee Malvo has been ordered detained following a court hearing today in Baltimore. The hearing had been scheduled to determine whether Malvo should be detained on federal juvenile charges related to the sniper attacks.

Authorities aren't saying anything more about the result of the hearing, which was closed because Malvo is a juvenile. His lawyer wouldn't comment as he left the courtroom.

Since he and John Muhammad were captured sleeping in their car, accused 17 year-old serial sniper Lee Malvo has not been seen publicly.

CBS News Correspondent Bob Orr reports that the media had petitioned for an open proceeding but Judge James Bredar declined, ruling information about Malvo's background would "likely be of an embarrassing, humiliating quality" that could "potentially stigmatize this child."

But according to CBS Legal Analyst Andrew Cohen, "This doesn't mean that everything about Malvo will be kept closed from the public, in fact it's the opposite. This is probably the last closed matter that will take place in Malvo's case."

That's because while Malvo's rights are being carefully guarded by the federal judge. Malvo, like Muhammad, faces murder charges as an adult in at least four states. In three of them, Virginia, Alabama and Louisiana, the teenager could get the death penalty.

Sources tell Orr that Attorney General John Ashcroft is expected to decide this week which jurisdiction gets first crack in the sniper case.

Meanwhile, authorities are investigating whether the sniper suspects may have shot a man a month before the Washington-area attacks in the town where the ex-wife of the older suspects lives.

Paul LaRuffa was shot six times at close range after closing his restaurant in Clinton, where John Allen Muhammad's ex-wife, Mildred, lives. A Sony laptop computer was stolen with more than $3,000 in receipts.

A Sony laptop was found in Muhammad's car when he and Malvo were arrested Oct. 24 at a rest stop.

LaRuffa, 55, survived the shooting and was able to go back to work after two weeks in the hospital. Reached at his restaurant Sunday, LaRuffa said he wanted to know if the laptop was his.

"I wish somebody would tell me 'yes, it's yours, no, it's not yours,' and that's what's frustrating about it," LaRuffa said. He said he was shot with a .22-caliber weapon.

"I don't know if it's linked," LaRuffa said. "Yes, there are coincidences. I don't know."

Muhammad and Malvo have also been charged in shooting outside a liquor store in Montgomery, Alabama. A clerk was killed and another person was wounded. Police found a .22-caliber handgun near the scene.

Capt. Andy Ellis, a Prince George's County police spokesman, said Sunday that the department is looking into whether the Sept. 5 shooting is related.

Muhammad, 41, and Malvo, 17, also face state and federal counts in the shootings in Maryland, Virginia and Washington, D.C, that left 10 people dead.

Those shootings involved a single gunshot fired from a .223-caliber Bushmaster rifle.

The suspects also have been charged in the shooting of a woman in Louisiana.

On Friday, police linked a Sept. 14 shooting in front of a beer and wine store in Silver Spring, Maryland, to the sniper suspects. The store clerk survived.

As detectives work to pull together all the evidence in the case, and prosecutors work to determine exactly what can be done with it, the families of the sniper victims are left with only pictures, memories and questions.

Nine relatives of four people killed in the sniper spree gathered at a Washington, D.C., area hotel Saturday, to meet for the first time and console each other.

"My perception is we're almost sharing the grief," said Marion Lewis of Idaho, who lost his daughter, Lori Ann Lewis-Rivera. "Spreading the weight of it among all of our shoulders helps lighten the load a little bit."

Lewis' 25-year-old daughter was killed as she vacuumed her van at a Kensington, Md., gas station.

As the families introduced themselves, they hugged and offered condolences. Gathering in small circles, they skipped the small talk of new acquaintances, instead speaking quietly of God and faith and how they are getting through every day.

When conversation turned to the suspects, several said they had struggled to answer one question: Why?

"My biggest question was what motivated them to do this," said Larry Meyers Sr., whose brother Dean Meyers, 53, was gunned down Oct. 9 at a gas station in Manassas, Va. "I'd just like to unlock the box to see what went into making, not one, but two individuals do this."

The family members brushed off questions about mistakes police might have made in not answering the alleged snipers' calls to tip lines and stopping Muhammad's car during the spree but not questioning him.

"At this point, there's no reason to assign any blame," Lewis said.

Several also said they are not in favor of executing the suspects even if they are convicted.

Andrea Walekar's father, taxi driver Prem Kumar Walekar, 54, was killed Oct. 3 at gas station in Rockville, Md. "God is the only one who can judge anybody," she said.