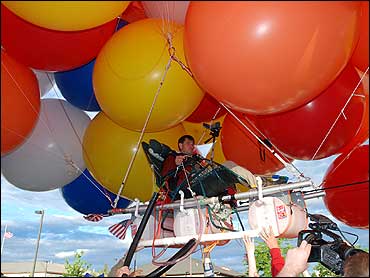 Using his trusty BB gun to help him return to Earth, a 48-year-old gas station owner flew a lawn chair rigged with helium-filled balloons more than 200 miles across the Oregon desert Saturday, landing in a field in Idaho.

Kent Couch created a sensation in the tiny farming community of Cambridge, Idaho, where he touched down safely in a pasture and was soon greeted by dozens of people who gave him drinks of water, local plumber Mark Hetz said.

"My wife works at the City Market," Hetz said. "She called and said, 'The balloon guy in the lawn chair just flew by the market, and if you look out the door you can see him.

"He takes his BB gun and shoots some balloons to lower himself to the ground. When he hit the ground he released all the little tiny balloons. People were racing down the road with cameras. They were all talking and laughing."

Couch covered about 235 miles in about nine hours after lifting off at dawn from his gas station riding in a green lawn chair rigged with an array of more than 150 giant party balloons.

Sandi Barton, 58, who has lived her whole life in this town of about 300, said she and her brother-in-law were the first ones to reach Couch and shook his hand.

"Not much happens in Cambridge," she said, adding that about half the town turned out.

"He came right over our pea field," she said. "He was coming down pretty fast."

She said Couch gave some of his balloons to local children.

It began after Couch, clutching a big mug of coffee, kissed his wife and kids goodbye, then patted their shivering Chihuahua, Isabella, on the head.

After spilling off some cherry-flavored Kool-Aid that served as ballast, Couch got a push from the ground crew so he could clear light poles and soared over a coffee cart and across U.S. Highway 20 into a bright blue sky.

"If I had the time and money and people, I'd do this every weekend," Couch said before getting into the chair. "Things just look different from up there. You've moving so slowly. The best thing is the peace, the serenity.

"Originally, I wanted to do it because of boyhood dreams. I don't know about girls, but I think most guys look up in the sky and wish they could ride on a cloud."

Couch's wife, Susan, called him crazy: "It's never been a dull moment since I married him."

This was Couch's third balloon flight. He realized it would be possible after watching a TV show about the 1982 lawn chair flight over Los Angeles of truck driver Larry Walters, who gained folk hero fame but was fined $1,500 for violating air traffic rules.

In 2006, Couch had to parachute out after popping too many balloons. And last year he flew 193 miles to the sagebrush of northeastern Oregon, short of his goal.

"I'm not stopping till I get out of state," he said.

To that end, he ordered more balloons. Dozens of volunteers wearing fluorescent green T-shirts that said "Dream Big" filled latex balloons 5 feet in diameter, attached them to strings and tied clusters of six balloons each to a tiny carabiner clip.

Each balloon gives four pounds of lift. The chair was about 400 pounds, and Couch and his parachute 200 more.

For that job, he carried a Red Ryder BB gun and a blow gun equipped with steel darts. He also had a pole with a hook for pulling in balloons, a parachute in case anything went wrong, a handheld Global Positioning System device with altimeter, a satellite phone, and two GPS tracking devices. One was one for him, the other for the chair, which got away in the wind as he landed last year.

For food he carried some boiled eggs, jerky and chocolate.

Couch flew hang gliders and skydived before taking up lawn-chair flights. He estimated the rig cost about $6,000, mostly for helium. Costs were defrayed by corporate sponsors.