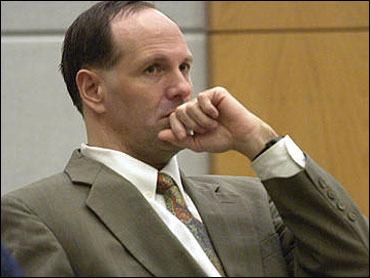 A convicted child molester was found guilty of being an accessory to murder for helping two young brothers who bludgeoned their father to death with a baseball bat.

Ricky Chavis, 41, was sentenced to the maximum 30 years in prison Wednesday after he was found guilty of accessory after the fact to first-degree murder and evidence tampering.

Chavis, who has been convicted of 17 felonies, helped Alex and Derek King cover up the Nov. 26, 2001, beating death of their father, Terry King, 40, at their home in nearby Cantonment.

After the home was set on fire, the boys called Chavis. He picked them up, took them to his Pensacola home, washed their clothes and hid them from police before turning them in the next day.

Chavis stared straight ahead when the verdict was read and showed no emotion. His lawyer, Michael Rollo, argued the sentence was disproportionate to the seven and eight-year sentences the boys received for the killing.

"It's just simply not fair. This is politics, judge. This is a persecution not a prosecution," Rollo said.

A judge threw out the boys' convictions and ordered mediation that resulted in both pleading guilty to third-degree murder. Alex is serving seven years and Derek eight at separate juvenile facilities.