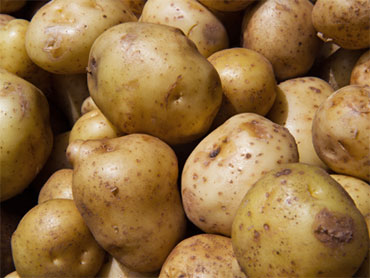 The man who's on a 60-day all-potato diet wishes he would have set a goal of one month instead of two.

Chris Voigt of Washington state told the Tri-City Herald that - as good and healthy as potatoes are - there's only so many ways they can be prepared. And, about halfway through his tuber diet, he's had them boiled, baked, steamed, grilled, fried, marinated and mashed.

Voigt, the executive director of the Washington Potato Commission, began the project saying he was sick of people labeling potatoes as junk food.

He committed to eating 20 potatoes a day - and no cheating with toppings like cheese or bacon.

Voight says potatoes are rich in potassium, fiber and vitamin C and have plenty of protein.

For variety Voigt soaked one potato in pickle juice. And his wife made him potato ice cream.