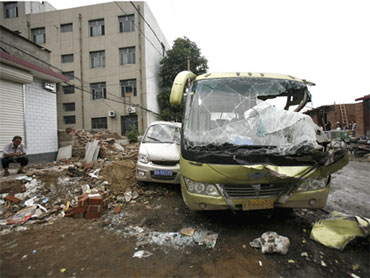 A drunken man went on a rampage while driving a shovel loader in northern China, smashing into shops and vehicles and killing 11 people, a government spokesman said Monday.

The incident began when 38-year-old Li Xianliang killed a customer Sunday at the Hongyuan coal depot in Hebei province's Yuanshi county where he worked driving a shovel loader, said a news release issued by the county government.

Li, who had been drinking, then drove his loader down an adjacent road, smashing into cars, buses, motorcycles, trucks and roadside shops, the news release said. The tractor eventually came to a stop in a field where police subdued the man after the hour-long rampage.

The man was taken into custody and likely faces the death penalty if convicted of murder.

The news release said eight people were killed outright and 20 injured, while a Yuanshi county spokesman, who refused to give his name as is common with Chinese officials, said three more had died in hospital.

Photos posted to online news websites showed blankets covering the dead, vehicles smashed or flattened after being run over, and the fronts of shops torn out by the loader's powerful shovel.

Fears over copycat attacks led the central government to limit coverage about the assaults, which have left more than two dozen people dead and scores wounded.

The grisly attacks, which have also included a courthouse shooting and random slashing attacks at markets and on a train, have prompted an increase in public security and calls for more attention to be paid to mental health problems that often go undiagnosed and untreated.