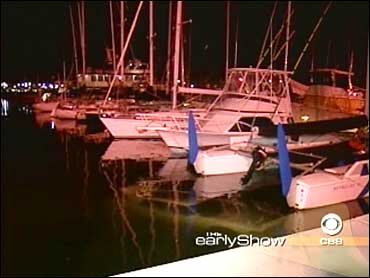 A Good Samaritan saved the life of a 15-year-old girl in a car that drove off the parking lot of Hawaii's Waikiki Yacht Club and landed in the ocean.

reports
Alan Lu of CBS affiliate KGMB in Honolulu, the Johnny-on-the-spot insists he's not a hero.

Inside the rapidly submerging vehicle were 66-year-old Michael McCarthy and his step-granddaughter. The 15-year-old frantically dialed 911.

That was her only call.

No one saw the car go in, Lu says.

But Petty Officer 1st Class Larry Cummins happened to notice something in the water.

The 37-year-old Honolulu resident says he "saw some bubbles coming up and I said (to a friend), 'You know what? That's a car. That's a Cadillac.

"So," he told Lu, "I took off my shirt and took off my slippers and got my phone and stuff, and jumped in the water."

He reached the vehicle but, because of sediment swirling around, couldn't see anything.

"Of course, it was pitch black. Couldn't see. Might as well have been diving with your eyes closed."

Using his hands, Cummins opens one of the doors and felt around.

It was the 15-year-old, who was unconscious. Cummins and a friend took her to safety.

When rescue teams found him, he had died.

Still, the girl is alive due to Cummins' actions. But when Lu asked him if he considers himself a hero, Cummins responded, "No, not at all. (I'm just an) average guy that I hope that anybody would do for anybody that is in time of need."

The girl is now out of the hospital and wants to meet Cummins, Lu says.