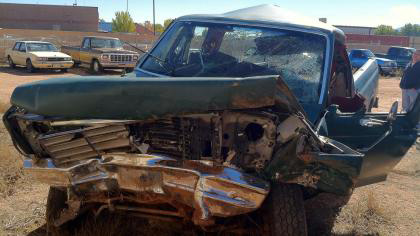 DENVER – A man trapped in truck for nearly a week after it crashed off a Colorado highway is still hospitalized more than a month later and recovering from having both legs amputated.

Rick Koester was the passenger in a truck that fell down a 30-foot embankment off Highway 50 near Canon City, southwest of Colorado Springs, on Oct. 11.

Koester was pinned for six days as he lay on top of the driver, his friend Ronald Lee Mohr, who died in the accident.

"I remember waking up after the truck was already wrecked," Koester told CBS4 in Denver. "Waking up four to five times thinking I was in a dream. In my mind I was thinking, 'Why can’t I move.'"

Koester had no food or water and temperatures dipped close to freezing.

Koester was found by Colorado Department of Transportation workers who were repairing a fence.

After he was rescued and taken to the hospital, doctors said his body temperature was only 79 degrees.

Surgeons had to amputate both legs below the knee. He lost fingers and pints of blood, and was near death as his family arrived from out of state.

Koester’s mother had to tell him what happened when he woke up. He does not remember the crash.

“Nobody can prepare a mother to see their son like that,” Dial said.

He told his daughter what happened over the phone.

"She’s been taking a tape measure to her own leg to see just how far up they cut my legs off," Koester said.

Doctors told Koester he will need months to fully recover and then more time to be fitted for prosthetics.

Koester plans to walk again. His family believes he still has a full life ahead of him.

“This is our second chance with him," Dial said. "I don’t know what he’s meant to do but it’s going to be spectacular.”

Koester hopes to move home with family when he is well enough to leave the hospital.

Both workers who found Koester were honored last month by Colorado’s Transportation Commission.