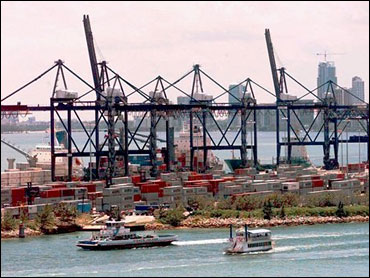 Two rapid-fire goals with the clock officially run out gave Manchester United the most prized title in European club soccer and a unique place in the sport's long history.

"I can't believe it," United manager Alex Ferguson said. "That's football. You never give in."

It was the first top European championship for the storied Reds from England since 1968, and left them the first team from soccer's birthplace to win the league, FA Cup and continental champions titles in one season.

Manchester also became the first nonchampion to win the Champions Cup. It finished second in the English Premier League to Arsenal last season but made the top-level European tournament this season when the field was expanded.

Bayern Munich, which also made the field through expansion before winning the Bundesliga this season, controlled most of the play after taking a 1-0 lead in the sixth minute on a free kick by Mario Basler.

But Sheringham and Solksjaer were inserted to shake things up, and they did just that, leaving Bayern players slumped and stunned on the field moments after Solksjaer's winning goal.

"Teddy and Ole Gunnar repaid my faith in them," Ferguson said. "It's fantastic. I'm so proud of my players."

Both Manchester goals came after corner kicks by David Beckham. On the first, Sheringham picked up a Bayern clearance at the edge of the penalty area and twisted around to send the ball into the low corner.

On the second, Solksjaer pounced on a ball headed toward the Bayern goal and kicked it into the net from close range.

"The team played so well, we had to score some goals because of the pressure we had the whole game," Solksjaer said. "Someone had to do it."

More than 30,000 United fans among the sellout crowd of 90,000 at Barcelona's Camp Nou Stadium sang in joy long after the final whistle as Manchester players went around the field, displaying the coveted cup.

It was quiet a change from the way the game started. Things could not have gone more wrong for Manchester.

Bayern striker Carsten Jancker was brought down just outside the United penalty area.

From 17 yards out, Basler took the free kick, sending a swerving shot around the United wall and finding the blind side of goalkeeper Peter Schmeichel, playing his final match before leaving the club.

Two Bayern players who stood at the edge of the United wall moved quickly away as the shot went past them. Schmeichel made no move to stop the ball.

Bayern president Franz Beckenbauer, the star of the team that won three straight titles between 197 and 1976, called it a "horrible defeat."

"Only seconds separated us from victory," he said. "We controlled the last 20 minutes and we could have extended our lead. But Manchester deserved to win."