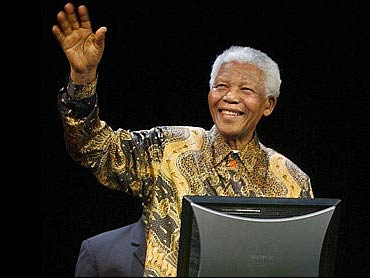 The failure of the world to share lifesaving AIDS treatment with the "millions of people who need it most" in the developing world is a travesty, Nelson Mandela told the biggest AIDS research conference of the year Monday.

Europe should at least match the U.S. commitment, he said.

Nations hard hit by AIDS have not done nearly enough to combat the epidemic, especially in sub-Saharan Africa, Mandela said.

"This is completely unacceptable. It, too, is a travesty of human rights," Mandela said. "Yes, these countries are poor, but we know they have the capacity to do more, much more."

The 84-year-old Nobel Peace Prize laureate singled out Uganda, Senegal and Botswana as notable exceptions and said he had grave concerns about India, China and Russia, which have rapidly evolving epidemics.

"If they follow the trend of Africa, the result will be calamitous, not only for the countries concerned but for the whole world," he said.

The United Nations estimates about 45 million people worldwide are infected with HIV. About 30 million of them live in poor countries.

More than 6 million of those are in immediate need of HIV drugs and economists estimate it will take $10 billion a year to bring treatment to half of those people by 2005.

Since AIDS was first recognized about 20 years ago, 26 million people have died — 95 percent of them in the developing world, Mandela said.

"By all accounts we are dealing with the greatest health crisis in human history. By all measures, we have failed in our quest to contain and treat this scourge," Mandela said.

"Why have we failed? In the end, it boils down to one inescapable fact — we have failed to translate our scientific progress into action where it is most needed, in the communities of the developing world," he said. "This is a global injustice which cannot be tolerated. It is a travesty of human rights."

He was referring to the fact that lifesaving HIV drugs are not being made available to the millions of people in developing countries.

"The single most important step we must now take is to provide access to treatment throughout the developing world," he said to enthusiastic applause.

"We must act now for the sake of the world," he concluded.

As Mandela was being helped off the podium by conference officials, a small group of HIV activists moved toward the stage chanting: "treat the 6 million, where's the 10 billion?"

Activist Gaelle Krikorian of Act Up-Paris climbed onto the stage and after a few moments was embraced by Mandela.

In other developments at the conference: