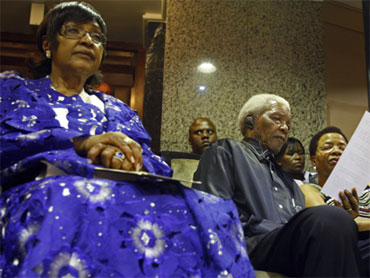 Nelson Mandela's ex-wife denied Friday that she had given an interview to a British newspaper in which she was quoted sharply criticizing the anti-apartheid icon.

The London Evening Standard had quoted Winnie Madikizela-Mandela as saying that her ex-husband had "let us down" and that she could not forgive him for accepting the Nobel Peace Prize in 1993 alongside white president F.W. De Klerk.

Madikizela-Mandela said she did not grant an interview to the newspaper but she did not specifically deny making the remarks, which created a stir in South Africa after they were carried by local media.

"I will in the coming days deal with what I see as an inexplicable attempt to undermine the unity of my family, the legacy of Nelson Mandela and the high regard with which the name Mandela is held here and across the globe," Madikizela-Mandela said in a statement distributed by the Nelson Mandela Foundation.

Madikizela-Mandela had been traveling abroad at the time the article was published earlier this week.

The Evening Standard said the conversation with Madikizela-Mandela was conducted with Nadira Naipaul, wife of Nobel literature laureate V.S. Naipaul.

"Nadira Naipaul is a distinguished journalist who visited Winnie Mandela at home and spoke to her at length about her experiences," the newspaper said in a statement Friday. "Nadira and her husband, the writer Sir V.S. Naipaul, are photographed with Winnie Mandela and this picture was printed with the article. We cannot understand Winnie Mandela's denial of an event and conversation which clearly took place."

Madikizela-Mandela's office said Friday she was unavailable for further comment.

In the piece, Madikizela-Mandela also was quoted as accusing the current leadership of Mandela's party of exploiting his image while sidelining him as a leader. And she was quoted calling Nobel Peace laureate Desmond Tutu a "cretin."

The published comments raised eyebrows in South Africa, while the governing African National Congress party had said it would wait to speak to Madikizela-Mandela before commenting.

Madikizela-Mandela denied that she had given Nadira Naipaul an interview.

"It is therefore not necessary for me to respond in any detail to the contents of a fabricated interview," she said in her statement.

Mandela, 91, is revered by blacks and whites in South Africa, but is not above criticism. The most common are complaints that he devoted too much time during his 1994-99 presidency to seeking reconciliation with whites and too little to uplifting blacks mired in poverty by apartheid.

At a forum last month marking the 20th anniversary of Mandela's release from prison, Madikizela-Mandela said that Mandela was loved and recognized around the world for his fearlessness, and that he had emerged from prison still committed to revolution.

Mandela accused Madikizela-Mandela, his second wife, of infidelity and the two divorced in 1996, six years after he walked free following 27 years in prison.
By Associated Press Writer Nastasya Tay