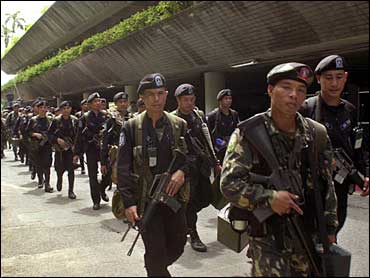 Almost 300 mutinous troops who stormed a downtown shopping and apartment complex Sunday demanding the government resign ended their standoff and returned to barracks without a shot fired.

Booby trap explosives were being defused in the capital's Makati financial district as President Gloria Macapagal Arroyo announced they had surrendered peacefully and would face investigation according to "the articles of war."

Five officers, all captains and lieutenants, regarded as ringleaders "will face the full consequence of what they have done."

"The crisis in Makati is over," a visibly relieved and smiling Arroyo said in a nationally televised address. Senior aides at the presidential palace clapped.

Arroyo had set two deadlines earlier for using force to defuse the crisis, but both passed as government negotiators entered into talks with the rebellious troops.

"This is a triumph for democracy," she said.

Arroyo said 296 soldiers, including 70 officers, "are standing down and returning to barracks."

Hours earlier, the president declared a "state of rebellion" giving authorities emergency powers to make arrests without warrants, sent tanks to surround the beseiged complex and demanded that mutineers give up or face possible attack.

In an earlier televised appeal, Arroyo told the rogue soldiers: "Your actions are already hovering at the fringes of outright terrorism. You have already stained the uniform. Do not drench it with dishonor."

The mutinous officers and soldiers complained in a statement about corruption and favoritism. Troops have in the past complained about low and unequal salaries.

The standoff at the Glorietta Complex started off dramatically but later looked like surreal political protest rather than a coup as the mutineers — their demeanor largely casual despite tanks outside — held news conferences in a toney apartment building they seized.

Away from the scene, there was little sign of tension as Filipinos took the latest in a long line of coup rumors in stride.

The mutineers told a news conference they were willing to discuss grievances.

"We are not attempting to grab power" navy Lt. Sr. Grade Antonio Trillanes told reporters. "We are just trying to express our grievances."

Unlike the "people power" revolts that peacefully ousted two presidents in recent years, there appeared to be little public support for the mutiny. The military chief of staff declared loyalty to the president.

Arroyo met with Trillanes' mother, who appealed to her son to resolve the crisis peacefully.

In camouflage unforms, the renegade troops set up gun posts and rigged explosives at 3 a.m. (2000 GMT Saturday) around the complex, including a residential high-rise that is home to foreign diplomats and the city's rich. Packs allegedly containing C-4 explosives were hung from traffic signs and doors to an upscale department store in the mall, with wires strung to the inside of the complex.

"We demand the resignation of our leaders in the present regime," the mutineers said in a statement. "We are willing to sacrifice our lives today, to pursue a program not tainted with politicking."

They also released a video accusing the government of selling arms and ammunition to Muslim and communist rebels, staging deadly bombings to justify more aid from the United States, and preparing to declare martial law to stay in power.

Defense Secretary Angelo Reyes said he has recommended to Arroyo that an independent commission look into allegations of arms sales to rebels and his involvement in a recent deadly bombing in the south.

But he warned: "If these renegades don't stand down, they will be dealt with as rebels."

The government sent marines to surround the complex. Television footage showed them shaking hands with some of the rebellious officers, raising questions about what they would do if ordered to mount an assault.

The standoff began soon after Arroyo ordered the arrest late Saturday of a group of junior officers who deserted with their weapons and were believed to be plotting a coup. Rumors of a coup plot had been spreading for the last week.

Trillanes claimed to have the support of 2,000 officers and soldiers — but the group inside the complex was much smaller than that. They were armed with rifles and wore red arm bands with a symbol of sun rays.

Trillanes said the explosives were for self-defense: "If they try to take us down, we will be forced to use it."

The influental Roman Catholic archbishop of Manila, Cardinal Jaime Sin, said in a statement that reforms are needed in society and government but that it "must be done through peaceful means and deeds of justice."

Australian Ambassador Ruth Pearce initially was prevented from leaving the apartment complex. But all residents were later evacuated, some carrying children and luggage past a rebel machine gun outside.

U.S. Ambassador Francis Ricciardone said the mutiny did not appear to be a real threat to the government but advised Americans to stay at home and avoid gatherings.

"We made it clear to the armed forces ... and any other sector of the society ... that the United States' relationship with this country is dependent on it being a government that is rooted in the rule of law, not mob rule," he said.

There were several coup attempts against former President Corazon Aquino in the late 1980s by officers complaining about corruption.

In 1989, rebellious troops occupied the same commercial center for several days, deploying snipers on top of the Intercontinental Hotel and nearby high-rises, until they were persuaded to surrender.

Defense Secretary Reyes said officials didn't want the current standoff to drag on "because it will affect the economy, the stock market and everything." Arroyo was scheduled to give her annual state of the nation address Monday.

Interior Secretary Jose Lina said the government would seek the arrest of Sen. Gregorio Honasan, citing an intelligence report reportedly linking the former army colonel to the mutiny. Honasan, who has been accused of involvement in past coup plots, denied any "influence or control" over the mall takeover. He later joined government negotiators in meeting the rebels.

Arroyo was sworn in as president as her predecessor, Joseph Estrada, was forced out in January 2001 by mass protests over alleged corruption. Supporters of Estrada continue to challenge her legitimacy as leader.

Arroyo has said she won't run in presidential elections next May, although rumors persist that she will change her mind.

Aquino, the former president, went on television to urge citizens to pray for Arroyo to navigate through the current crisis. "Let us remember that this democracy is not only our right but also our responsibility," Aquino said.

Arroyo, a 56-year-old economist, has enjoyed generally solid public support and is one of the staunchest U.S. allies in Asia. The United States has been working closely with the 120,000-strong Philippine military, which has been battling Muslim separatists and communist rebels for the last three decades.