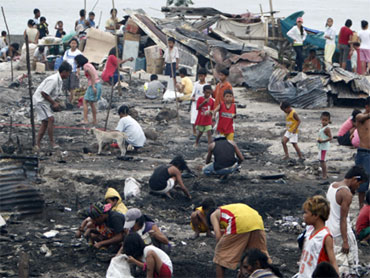 Fire raced through a slum near the main port in the Philippine capital, leaving 4,000 people homeless and killing a 5-year-old girl, an official said Sunday.

The Saturday night blaze gutted 500 shanties, which were packed together in a crowded slum along the rim of Manila Bay, some housing two or three families. There were no other reports of deaths or major injuries at the Baseco Compound, Senior Fire Officer Emmanuel Gaspar said.

The 53-hectare (130-acre) compound that used to house a shipyard has been ravaged by huge fires before. A 2002 blaze left some 15,000 residents homeless, and a 2004 fire razed shanties of 25,000 people. Tight living conditions at Baseco and other slums allow flames to quickly spread through houses made of light materials.

The cause of the fire, which raged for two hours, fanned by strong winds, is still under investigation, Gaspar said. An Associated Press photographer at the site saw people waiting to be treated for minor injuries, including wounds from glass shards.

Amid the ashes and a few wooden posts that were left of their home, Amorsolo Villamor's family ate their breakfast of rice gruel Sunday morning, unwilling to leave the tiny patch of land where their shanty used to stand.

Villamor, his wife and three children shared the place with two other families.

He said his family decided to return to their gutted home after running from the flames because they feared that other families may stake a claim to the land if they moved to a nearby village hall that was being turned into an evacuation center.

Gwendolyn Pang, a Philippine National Red Cross official, said the victims were being housed in two evacuation centers within the compound, including a social hall.