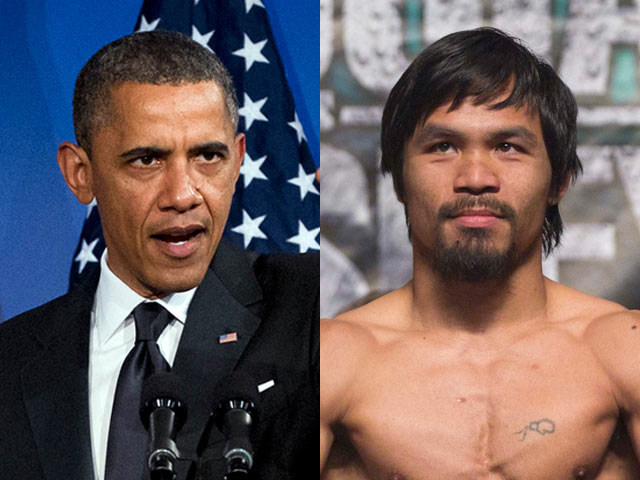 (CBS News) Manny Pacquiao is many things to many people. To most, he's one of the best pound-for-pound boxers to ever grace the ring. To legions in his native Philippines, he's not only a sports hero but a Congressman. To Forbes magazine, he's the fourth most influential athlete in the world. And to others still, he is a chart-topping ballad singer.

But Pacquiao is first and foremost a devoted Catholic who's as quick to quote the Bible as he is to knock out an opponent. So it's perhaps no surprise that he has come out swinging against President Barack Obama's recent support of same-sex marriage.

In a recent interview with the National Conservative Examiner, the WBO welterweight champion invoked the Bible when criticizing the president's stance.

"God's words first ... obey God's law first before considering the laws of man," Pacquiao said in response to how he felt about Obama's public support of same-sex marriage. "God only expects man and woman to be together and to be legally married, only if they so are in love with each other. It should not be of the same sex so as to adulterate the altar of matrimony, like in the days of Sodom and Gomorrah of Old."

Pacquiao's stance is in line with his conservative views in the Filipino legislature. Last year, he was vehemently opposed to a proposed law that would make contraceptives accessible to most Filipinos and sex education mandatory.

Pacquiao's next fight is slated for June 9 against Timothy Bradley. A long-sought bout with Floyd Mayweather Jr. has been shelved numerous times, primarily over disagreements over money.