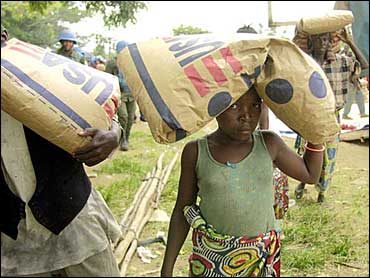 Too many humanitarian crises are forgotten as world attention focuses on headline-grabbing emergencies in Iraq, Afghanistan and other hotspots, the Red Cross said Thursday.

The World Disasters Report, issued annually by the International Federation of Red Cross and Red Crescent Societies, said 24,500 people died in natural and man-made catastrophes, ranging from earthquakes to plane crashes, in 2002. The figure does not include war.

Amid these deaths, the 239-page study said international aid made a general shift toward "high profile aid efforts in politically strategic conflicts," mostly linked to the U.S.-led war on terror. Aid to Afghanistan, for example, tripled after the Sept. 11 attacks even though the humanitarian needs were unchanged. Meanwhile, suffering countries like Angola, Somalia and Congo have been all but ignored, the report said.

"Humanitarian aid does not deal an equal hand to all those suffering under the shadow of conflict, disease or disaster," said federation Secretary-General Didier Cherpitel in his introduction to the study.

In April 2003, the U.S. Department of Defense raised $1.7 billion of relief and reconstruction aid for Iraq. The figure stood in stark contrast to the $1 billion shortfall in funds then faced by the U.N. World Food Program to avert starvation among 40 million Africans across 22 countries, the report said.

Even where there is enough aid, much of it may be inappropriate, reflecting the priorities and needs of donors rather than those suffering, the report said.

In Afghanistan, for example, the administration set up after the fall of the Taliban in late 2001 has complained that billions of dollars have been spent on short-term aid like food and medicine rather than much-needed reconstruction.

Food imports have undermined local markets. The arrival of 350 international aid agencies has driven up rents and drawn skilled Afghans away from public service jobs.

"Drivers working for an agency or an embassy earn about $500 per month, while Afghan doctors get about $45," said Jonathan Walter, editor of the report.

The study also expressed concern about the increasing involvement of the military in relief campaigns linked to conflicts. It cited the 1999 NATO intervention in Kosovo and the U.S.-led wars in Afghanistan and Iraq.

"Many humanitarians fear that regime change ... has blurred the lines between civilian and military humanitarian assistance, which could result in aid workers losing their impartial status and being targeted or even killed," it said. In the past year, aid workers have been killed, kidnapped or attacked in conflicts from Liberia to Afghanistan.