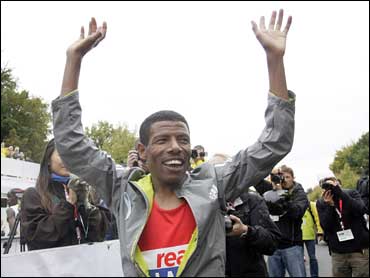 The 34-year-old Ethiopian lowered the mark of 2:04:55 by friend and Kenyan Paul Tergat four years ago by 29 seconds on the German capital's flat fast course, where six world records have been set.

In the women's race, his countrywoman Gete Wami defended her title in 2:23:17.

Gebrselassie picked up the pace over the last six miles, running alone without pacemakers, after he trailed the record by half-a-dozen seconds at the halfway point.

His furious pace carried him through the giant pillars of the Brandenburg Gate in downtown Berlin and he broke into a smile over the final yards as it became clear he would accomplish the feat in his second try in Berlin.

His arms flew up in triumph as he broke the tape.

"Don't ask me how I am," Gebrselassie said. "It's very special, spectacular."

This was the 25th world record for the Ethiopian, a two-time Olympic champion in the 10,000 meters. Kenyans Abel Kirui in 2:06:51 and Salim Kipsang in 2:07:29 finished second and third on Sunday.

Gebrselassie faded over the final miles last year in a failed bid at the record, settling for last year's fastest marathon of the year at 2:05:56.

This time, vowing again to break Tergat's mark, he upped his training mileage before the event. His record was also helped by a cool calm day.

"Today, there was a little wind, but otherwise perfect," he said.

The win helped him ease a painful memory, when he dropped out of the star-studded London Marathon in the spring. Later, he was diagnosed with allergies.

"That was very sad. I could not sleep at all the night after that and this experience still follows me until today," Gebrselassie said.

Wami picked up points in her bid to claim the $500,000 offered for winning the first World Marathon Majors Series. The former Olympic 10,000 champion is locked in a battle for the prize money with Jelena Prokopcuka of Latvia.

Gebrselassie picked up $71,000 for the win and the same amount in a world record bonus. He also reportedly earned $357,000 in appearance money.

The Berlin Marathon is the fourth-largest marathon in the world, drawing 40,000 to the race and another 8,000 entries in special events.