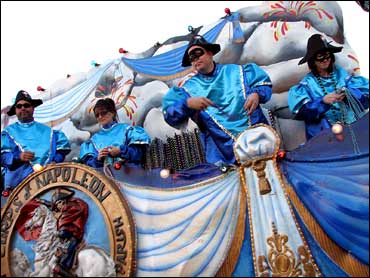 New Orleans hospitals struggling to provide health care in the months after Hurricane Katrina are bracing for a surge in Mardi Gras injuries this week that some worry could overwhelm an already overstretched health system.

The city's traditional Mardi Gras celebration kicked off last week and is due to culminate on Tuesday with large parades. New Orleans officials and residents have been eager to use the festival to celebrate the city's post-Katrina perseverance.

Raucous Mardi Gras crowds pose a challenge to emergency medical services every year. But this year, the city is bracing itself because emergency rooms are already filled near capacity trying to provide everyday health care for city residents while several hospitals remain closed.

"The hospital is really full now and that's my worry. It's a very big worry and it's a very big concern," says Helen Ruiz, a registered nurse and head of emergency services at Touro Infirmary in Orleans Parish.

The hospital has doubled its emergency staff, and on Friday a tent was set up outside to care for lightly injured patients and keep them out of the emergency room, where space is precious.

Hospital and emergency officials began worrying weeks ago about the possibility that huge Mardi Gras crowds could overwhelm medical services. Part of the plan called for hospitals to suspend elective surgeries today and into next week in an effort to keep hospital beds free.

Two emergency medical teams — one from Florida and one from North Carolina — are now in the city to help handle extra patients. A Mardi Gras task force also placed two hospital helicopters on alert and brought in two additional aircraft to evacuate patients to other hospitals in the region if needed.

"I think we've increased our capacity by about 30% and we don't know what the surge is going to be. The number of people coming in for this weekend is unknown and what's going to happen over the next five days is unknown," says Joseph F. Uddo, M.D. Uddo is the chairman of the Mardi Gras medical task force and head of surgery at East Jefferson Hospital, just across the Mississippi River from New Orleans in Jefferson Parish.

Emergency rooms are expecting a surge in trauma injuries from revelers falling off of balconies or getting run over by parade floats. Many patients with chronic diseases like diabetes or hypertension often "party a little too much to the point where their disease is now completely uncontrolled" and wind up needing urgent medical care, says Ruiz, whose hospital is two blocks from the Mardi Gras parade route on St. Charles Street.

Hospitals also know they will see scores of overly intoxicated partygoers who must be medically observed.

"This close to the parade route, I am very afraid that we're going to be inundated — so we did all we thought we could do to prepare for it," Ruiz says.

The extra emergency capacity is almost sure to be needed. New Orleans is still without basic community primary care services; this has forced residents to seek everyday care in emergency rooms. Waits of six hours or more are already commonplace, and hospitals' inpatient wards generally run at or near capacity.

New Orleans Mayor Ray Nagin told reporters Friday that a big party will give residents a chance to step back from the daily burdens they've endured since Katrina hit nearly six months ago.

"It's sweet from the standpoint that we need a Mardi Gras. We need to have an outlet to relieve some emotional stress," he said.

Nagin said the city's emergency services were "definitely ready" to handle the party.

John Wales M.D., head of East Jefferson Hospital's emergency department, tells WebMD that he's satisfied with the level of preparation in the city.

"On Ash Wednesday morning, if everybody says, 'My gosh, I don't know what they were so worried about', if that's their comment, it will mean we did fine," he says.