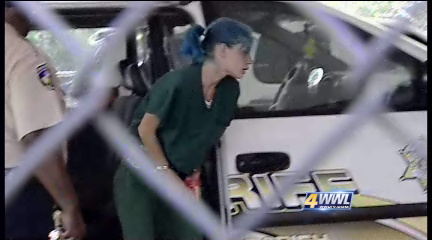 (CBS/AP) AMITE, La. - A Louisiana judge has found probable cause to keep Margaret Sanchez, a suspect in the murder and dismemberment of stripper Jaren Lockhart, in custody. Sanchez faces new criminal charges of harboring sex offender Terry Speaks. Both are suspects in Lockhart's killing.

Tangipahoa Parish sheriff's Detective Mike Moore reportedly testified on Tuesday that Sanchez referred to Speaks by two aliases the night of the couple's arrest. Moore also testified that Sanchez told officers she knew Speaks had a history or a warrant in North Carolina.

Sanchez, 28, was charged on June 18 with harboring a sex offender just as she was preparing to be shipped to a mental clinic for an evaluation. Speaks, 39, is now in federal custody for failing to properly register as a sex offender after committing a sex crime in North Carolina. He was convicted of three counts of indecent liberty with a minor in 2003.

The couple had been identified in a surveillance video leaving the Bourbon Street club where dancer Lockhart, 22, worked, around 2 a.m. on June 6. Lockhart's remains floated ashore on several Mississippi beaches, beginning June 7 in Hancock County.

Authorities believe the three knew each other and all worked in the French Quarter.

Complete coverage of the Jaren Lockhart Murder Suspects on Crimesider