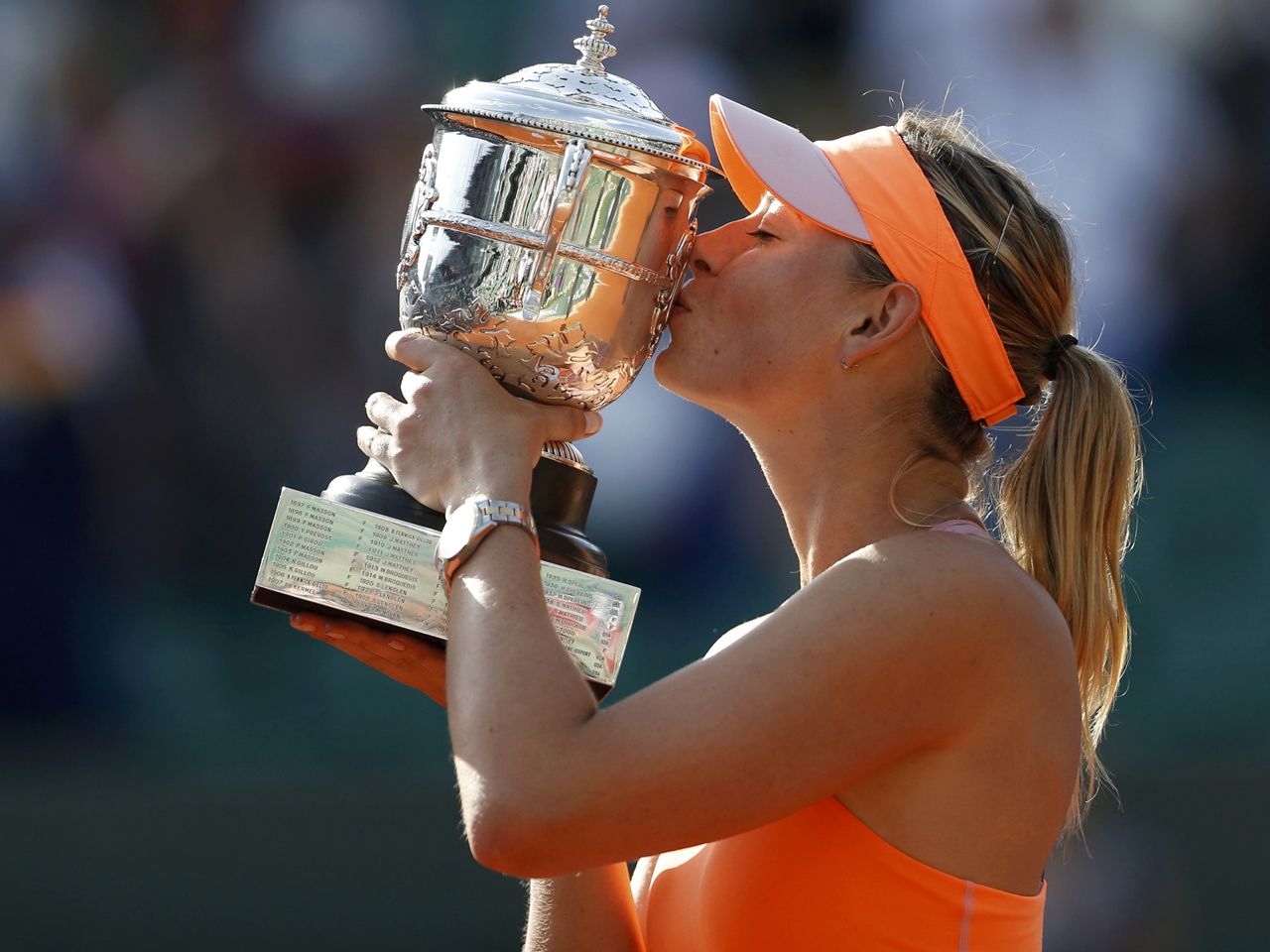 PARIS -- Even though her serve failed her repeatedly, Maria Sharapova is a French Open champion once again.

"This is the toughest Grand Slam final I've ever played," Sharapova said on court. "Really, this tournament means so much to me. It's a tournament, when I was young and growing up, I wanted to win.

"To think that I've won it two times is, I don't know. So emotional right now, I can't even talk."

Sharapova has struggled with her serve this week and was broken seven times in the final on Court Philippe Chatrier. But she was able to hold off Halep, and hold her serve in the final game, with steady groundstrokes that kept the Romanian on the run.

After Sharapova's final forehand forced an error from Halep's backhand, the Russian dropped to her knees and buried her face in her hands. She then looked to her team in the stands before shaking hands with Halep at the net.

Once the formalities were done, she climbed into the stands for some hugs and kisses.

Sharapova also won the title at Roland Garros in 2012, completing a career Grand Slam. She lost in last year's final to Serena Williams.

Halep, who was ranked only 57th heading into last year's French Open, was playing in her first major final.

"It's my first Grand Slam speech, so emotionally it's really difficult for me," Halep said, addressing the crowd after the match. "But I wish to have many more. But of course this one will be very special for me all my life."

The men's final is on Sunday. Rafael Nadal will go for his ninth French Open title against Novak Djokovic.

Neither Sharapova nor Halep was able to hold serve consistently, with 16 combined breaks of serve in the match.

In the 10 games of the final set, there were five breaks. And at one point, the pair went on a run of six straight breaks of serve, starting with the final four games of the second set and ending after the first two of the third.

Sharapova often looked to be in control, even in the tiebreaker. She led 5-3, two points from victory, but then lost the next four points to even the score at one set apiece.

The match lasted 3 hours, 2 minutes, the longest French Open women's final since 1996 when Steffi Graf beat Arantxa Sanchez 10-8 in the third. It was also the first women's final in Paris to go three sets since Jennifer Capriati beat Kim Clijsters 12-10 in the third in 2001.

Sharapova's game on clay has improved immensely over recent seasons, but her serve is still giving her problems. She lost the first set in each of three previous matches at Roland Garros, with nine double-faults in the semifinal win over Eugenie Bouchard. She had eight doubles in the quarterfinals.

Part of the reason for her inconsistency comes from having surgery on her right shoulder in 2008. Before that, the 27-year-old Russian had won Wimbledon in 2004, the U.S. Open in 2006 and the Australian Open in 2008. Since then, she has won the French Open twice.

But while Sharapova has been a star on the tour for a decade now, the 22-year-old Halep has only recently risen up the rankings and will move to No. 3 on Monday.

And she had an excellent run at Roland Garros.

Playing in the main draw at the clay-court major for only the fifth time, the 2008 French Open girls' champion reached the final without dropping a set.

Until she faced Sharapova.

"I had two incredible weeks here. It was an amazing tournament for me," Halep said. "I played my best. And I'm really happy that you guys came every match to support me and today also you were amazing."

Halep was trying to become only the second Romanian woman to win a Grand Slam title. Viriginia Ruzici, now Halep's manager, won the French Open in 1978.