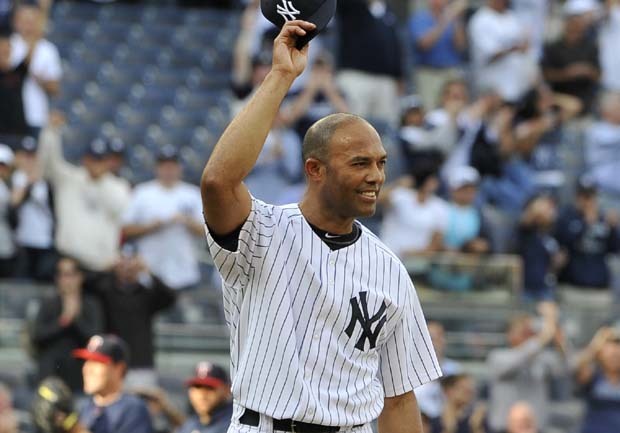 (AP) KANSAS CITY, Mo. - New York Yankees closer Mariano Rivera says he will return to the mound by 2013, vowing to overcome a knee injury that figures to end his season.

Rivera had hinted at the start of spring training that he would retire after the 2012 season, and he wasn't sure what he would do after tearing his right anterior cruciate ligament while shagging fly balls during batting practice Thursday.

Back at Kauffman Stadium on Friday, the 42-year-old closer firmly said he will not allow his career to end this way.

Is Rivera's career over after tearing ACL?

"I'm coming back. Write it down in big letters. I'm not going out like this," he said. "This has me thinking, I can't go down like this. If it takes two, three, four, five, seven more (seasons), whatever it takes."

Rivera dabbed tears from his eyes when he spoke Thursday night. He then went back to his hotel room, reflected and made his decision not to retire. He holds outside hope of returning late this season.

"Miracles happen," he said. "I'm a positive man. The only thing is that I feel sorry I let down my teammates. Besides that I'm OK."

Yankees captain Derek Jeter had predicted Thursday night that Rivera would be back.

With Rivera out, David Robertson figures to take over as closer, with Rafael Soriano also possibly getting some chances. Saddened by the injury, Yankees players were lifted by Rivera's decision.

"Everybody is happy to hear that, but you can't sit around and wait," Jeter said. "Guys get hurt. Injuries are unfortunate, But the games continue. I'm sure everyone's happy he's decided to do that. We still have work to do, so you can't sit here and count the days until he comes back."

"I thought he was going to come back anyways," he said. "I was one of those guys that didn't believe he was going to retire. He's still one of the best players in the game. It's tough to think at 42 he'd walk away."

Alex Rodriguez hopes Rivera will go through his rehabilitation with the major league team, rather than at the minor league complex in Tampa, Fla.

"We need him around and we need his presence and his leadership," A-Rod said. "He promised me that he's going to be around as much as possible and I'm going to hold him up to that."