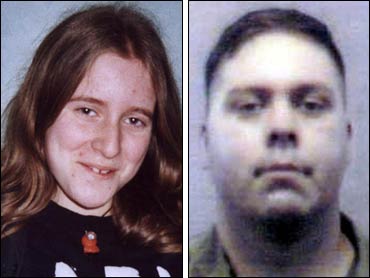 Toby Studabaker, a former U.S. Marine who disappeared with a 12-year-old English girl he met over the Internet, has phoned his relatives to say the child is safe and that he was contacting the FBI, his brother said Tuesday.

Leo Studabaker told BBC News his brother did not give his location or that of the girl, Shevaun Pennington. Police traced them as far as Charles de Gaulle airport near Paris.

Leo Studabaker said his 31-year-old brother had been deceived into meeting the girl and that he was "very mad when he found she had lied about her age."

Greater Manchester Police said they had not yet been able to confirm that the ex-Marine had been in touch with the FBI, but that police officers were checking.

Earlier Tuesday, French authorities said Pennington had flown back to Britain, but British police confirmed those reports were incorrect.

"From what I understand, Shevaun had written a letter and signed it for him to give to the authorities clearing him of any wrongdoing," Leo Studabaker said.

The ex-Marine, who spoke to his sister-in-law, Sherry Studabaker, said Toby had contacted the FBI and wanted to resolve the situation.

"I gave him a phone number to get hold of the FBI. I called the number and the lady told me she was talking on the phone to Toby Studabaker," Sherry Studabaker told BBC television.

"Shevaun is fine, she is not hurt, she is unharmed," she said.

The girl, of Lowton, near Manchester in northern England, left Britain on Saturday with Studabaker, of Constantine, Mich. Authorities believe they met over the Internet.

Leo Studabaker of Three Rivers, Mich., said his brother thought the girl was at least 18.

"I honestly don't think he knew anything about her being the age that she, I guess, is," Leo Studabaker said. "He was very insistent that she was 18 or 19 years old."

Stephen Pennington said on Monday that he wasn't aware of his daughter's relationship with the American.

"She loves punk rock and spends loads of her spare time on the computer. We keep it in the kitchen and knew she was talking to people online, but didn't know there was anyone in particular," Pennington said.

Studabaker joined the Marines in 2000 and served in an anti-terrorism unit in Afghanistan, said Sgt. Spencer Harris, a spokesman for Camp Lejeune in North Carolina. He was discharged on June 30, Harris said.

A senior British official said the case added urgency to legislation intended to outlaw cultivating sexual contacts over the Internet.

"There isn't a parent who knows and understands that their child will use the Internet, who doesn't have great sympathy with them in terms of what has happened and the way it has happened," Home Secretary David Blunkett told the House of Commons.