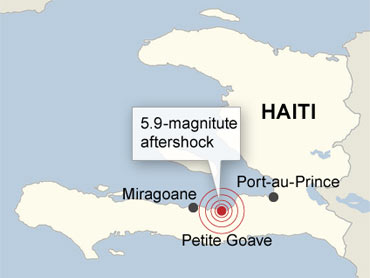 As another powerful earthquake rattled Haiti Wednesday, the U.S. military prepared to enter the area affected by the magnitude-5.9 aftershock.

A senior military officer told CBS News national security correspondent David Martin the region 35 miles southwest of the quake-ravaged capital which was struck Wednesday has not yet been searched and as many as 800,000 people are living there.

The most powerful aftershock yet shook more rubble from damaged buildings and sent screaming people running into the streets eight days after the country's capital was devastated by an apocalyptic quake.

"These are areas no one has eyes on yet," the official said, and there are believed to be as many as 800,000 people living there. This is the area the Marines are moving into."

The Pentagon's comments come as the U.S. military is sending additional ships to help with earthquake recovery in Haiti, including one that could remove debris blocking the main port, U.S. Defense Secretary Robert Gates said Wednesday.

Martin also reports that another group of Marines, previously headed to the Persian Gulf, is being sent to Haiti - three ships with 4,000 sailors and Marines on board.

Wednesday's magnitude-5.9 temblor (originally reported as 6.1) was the largest of more than 40 significant aftershocks that have followed the Jan. 12 quake. The extent of additional damage or injuries was not immediately clear.

Wails of terror rose from frightened survivors as the earth shuddered at 6:03 a.m. U.S. soldiers and tent city refugees alike raced for open ground, and clouds of dust rose in the capital.

The U.S. Geological Survey said Wednesday's quake was centered about 35 miles west-southwest of Port-au-Prince and 6.2 miles below the surface - a little further from the capital than last week's epicenter was.

"It kind of felt like standing on a board on top of a ball," said U.S. Army Staff Sgt. Steven Payne. The 27-year-old from Jolo, W.Va., was preparing to hand out food to refugees in a tent camp of 25,000 quake victims when the aftershock hit.

The strong aftershock prompted Anold Fleurigene, 28, to grab his wife and three children and head to the city bus station. His house was destroyed in the first quake and his sister and brother killed.

"I've seen the situation here, and I want to get out," he said.

A massive international aid effort has been struggling with logistical problems, and many Haitians are still desperate for food and water.

Correction: This story was updated at 3:11 p.m. ET to amend the location of the U.S. military's search.