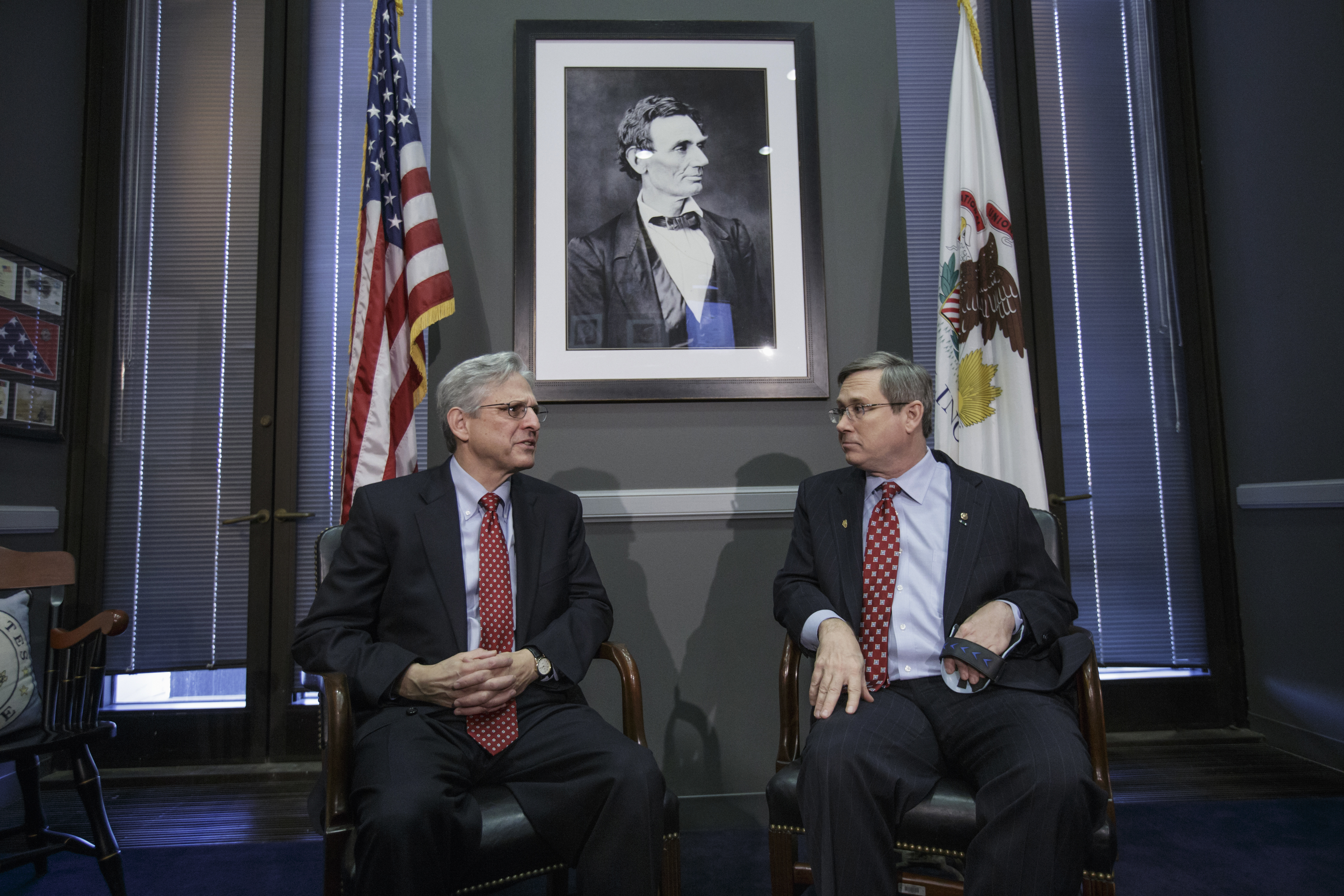 The Illinois Republican met with Garland on Tuesday afternoon at his office in the Hart Senate Office Building on Capitol Hill.

He tweeted a photo of their meeting and urged his colleagues to do the same.

Speaking to reporters with Garland besides him, Kirk called for "rational, adult, open-minded consideration of the Constitutional process" and called his colleagues who are refusing to meet with Garland "closed-minded."

Garland, 63, has also visited with Democratic Sens. Joe Donnelly of Indiana and Ben Cardin of Maryland on Monday, and is scheduled to see Al Franken of Minnesota and Kirsten Gillibrand of New York on Wednesday.

The meeting with Kirk, who faces a tough reelection race, comes nearly two weeks after Mr. Obama nominated Garland to the seat left open by the late Justice Antonin Scalia.

Most Senate Republicans are opposed to meeting with Garland and are refusing to give him a confirmation hearing and vote. They argue that they should wait until next January to consider a Supreme Court nominee so that they know the outcome of this year's presidential election, even though Scalia's death occurred nine months before Election Day.

Some Republican senators, on the other hand, have expressed a willingness to meet with Garland including Sen. Susan Collins of Maine, who plans to meet with him soon.

In an interview Tuesday morning with WGAN-AM, Collins said she is "perplexed" by Senate Majority Leader Mitch McConnell's decision to refuse consideration of Garland's nomination because Hillary Clinton or Donald Trump could appoint a nominee that senators might find less favorable.

"I must confess that I'm a bit perplexed by [McConnell's] position," Collins said. "I personally believe [Clinton] would be likely to choose a nominee who is to the left of Judge Garland."

Collins, who said she hasn't decided yet whether to support Garland, said there's "no basis" for the GOP's obstructionist position.

"Obviously, the leader's not real happy with me," Collins added.

In a speech Monday, Clinton called on Senate Judiciary Committee Chairman Chuck Grassley to give Garland a hearing and a vote.

Garland has served as the chief judge on the U.S. Court of Appeals for the District of Columbia for the last three years. He has served on the D.C. appellate court since 1997, when he was nominated to the bench by former President Bill Clinton. He was confirmed by the Senate in a 76-23 vote, which included seven Republicans, who still serve in the Senate, who voted in favor.