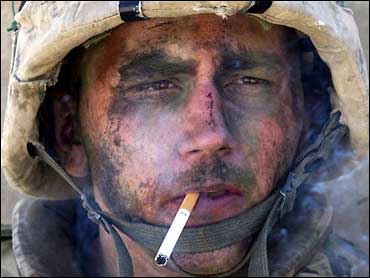 In November 2004, a photo of a U.S. Marine made the front page of newspapers across the country. The picture is still one of the best-known images of the war. But the man himself has moved on, and is having trouble adjusting to civilian life.

Lance Cpl. Blake Miller of Jonancy, Ky., came to be known as the "Marlboro Marine" when his picture was splashed across the nation.

The attention didn't get him any special privileges, and he served his entire combat tour before he and his unit were ordered home.

The Early Show co-anchor Harry Smith was there in February when Miller got to hug his mother upon his return.

At the time, Miller told Smith, "I lost a few of some of my dearest friends. People don't understand how you can be so close to someone that you've only known for such a short time but, when you spend a year-and-a-half with someone, you know some things about them their own family doesn't even know about. People say that the Marine Corps is a brotherhood, and you truly do not realize that until you actually need your brothers, and that's when they're there."

But, like many of his comrades, Miller wasn't able to completely put his time in Iraq behind him.

While on duty during the Hurricane Katrina relief effort, Miller suffered from symptoms of post-traumatic stress disorder (PTSD), and was granted an honorable discharge from the Marines in November.

Miller's life is also different in another way. In June, he married his longtime love, Jessica.

On The Early Show Tuesday, Miller told Smith, "For the most part, I mean, it was a big adjustment (when I got home) just trying to get in that mindset of being able to just roam, run around without fear of being shot at or where to look for danger. … It's unexplainable. I mean, just to go from that mindset to being able to walk around freely and just enjoy it."

Miller said the trouble that arose during his Katrina duties happened on the USS Iwo Jima when a sailor mimicked the whistle of a rocket-propelled grenade (RPG).

"For anybody to duplicate that sound," Miller told Smith, "they've had to hear it. Without even knowing what I'd done until after it was over, I snatched him up, I slammed him against the bulkhead, the wall, and took him to the floor, and I was on top of him."

Miller went into therapy, but wasn't told right away that he had PTSD.

"At first, they thought maybe it was the pressure of being on the ship," he said. "The more doctors I talked to, the more they came to the conclusion that (PTSD) is what it is. … I'm continuing my therapy; continued up until the day I got out (of the service), actually."

And Miller knows he's not alone.

"A lot of guys have had way worse incidents from being in Iraq," he said. "And I guess it just — it troubled me due to the fact that their incidents may have been more severe, and they weren't suffering from the same things I was. I just didn't understand how it could affect me so dramatically and not affect some of these guys. But a lot of them deal with different ways.

"The more and more I talk to (other guys), the more I found out there were a lot of Marines that are going through same or similar emotions. It's tough to deal with. Being in Iraq is something no one wants to talk about."