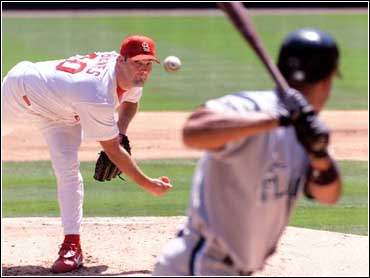 Thanks to Mike Lowell, the Florida Marlins wrapped up one of the best road stretches in franchise history.

Lowell's three-run homer capped a four-run eighth inning in a 5-3 victory over the St. Louis Cardinals on Wednesday. The Marlins took two of three from the NL Central leaders after sweeping the Cincinnati Reds for only the second 5-1 trip in franchise history.

"I think we've surprised some people as of late, and maybe all year, and hopefully we can keep doing that," Lowell said. "We're all kind of in the same boat here. There's no guaranteed contracts and we're young, we're hungry."

With runners on second and third and the Marlins trailing 3-2, Lowell hit his 17th homer on a 3-2 slider from reliever Matt Morris (0-3).

"That's why the guys who hit 30-plus get the big bucks," Lowell said. "I wouldn't say it was the last thing on my mind, but it was not what I was trying to do."

Armando Almanza (4-0), in relief of Ryan Dempster, walked two in 1 1-3 hitless innings. Antonio Alfonseca finished for his major league-leading 34th save in 38 chances.

Morris worked a perfect seventh, but retired none of the four batters he faced in the eighth. Mark Kotsay led off with a double, Kevin Millar doubled and Preston Wilson had a run-scoring single before Lowell's homer.

Wilson also had a sacrifice fly in the sixth for the Marlins' first run.

J.D. Drew hit a two-run homer in the first and Placido Polanco was 3-for-4 with an RBI triple for the Cardinals, who are 10-16 since the All-Star break. They've scored only five runs in the last 32 innings.

"If you play nine innings and only have a couple opportunities, it means you're not making enough happen," manager Tony La Russa said. "You leave yourself vulnerable."

La Russa shook up the lineup a bit, batting Drew second and giving shortstop Edgar Renteria a rest in favor of Polanco. He also top-loaded the order with five straight left-handed batters.

"You're always concerned," La Russa said. "That's the way you're supposed to operate. Otherwise, you walk around with your chin stuck out waiting for somebody to right-hook you."

"I'm just going out trying to make good pitches," Benes said. "I don't determine when they take me out of the game. I felt fine and felt like I could have continued."

Fernando Vina singled to open the first and Drew followed with his 16th homer. All of Drew's homers have come against right-handed pitchers.

"Three pitches, two runs," Dempster said. "You've just got to realize they're going to be aggressive and you've got to battle your butt off."

Polanco hit his RBI triple in the sixth as right fielder Kotsay barely missed a diving catch, giving the Cardinals a 3-1 lead. He's 14-for-32 (.438) for his career against Florida, but flied out with runners on second and third against Dan Miceli to end the eighth.