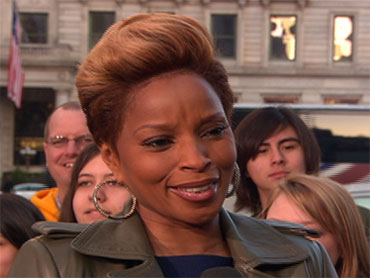 Blige, a New York native, said she loves summer in the city.

"The fresh air and the way the trees blossom when you get out to Jersey and Westchester and all of that," she said. "When everything fills up, it's just beautiful out here. ... New York City is the best because you don't have to drive anywhere you can come to Manhattan and walk around and really enjoy the city."

While in New York, Blige will perform a free concert n March 22, sponsored by the Degree deodorant company.

Blige recently released the international version of her album "Stronger with Each Tear." The album has some new tracks, including some Led Zeppelin covers.

"People are just going to lose it. They're going to be like, 'Really? What? Mary's a rock chick?' Really, it's hot and there's some club music, but it's done for the international album."

Both the U.S. and international albums are available in stores and online. In the U.S., her album debuted on U.S. Billboard Chart at No. 2 and sold 332,000 copies in its first week and went to No. 1 on the Billboard R&B Chart. "The One" was released as the album's first single, followed by "I Am" and "Each Tear."